The Minnow Angler's Paradise - a Memory of Broughton Astley.

'The Stream' ! We always have called it 'the brook' - Broughton Brook, and still do. However, the brook is in fact a tributary to the River Soar, it may in fact actually be the River Soar but simply not recognised as such until a few miles downstream. Whatever it's status, in the 1930s it provided many children with a source whereby they were able to enjoy hours of pleasurable activity.
Many would simply enjoy paddling up and down the stream in their 'wellies', others happy to do the same (probably even happier), to paddle without their wellies on.
Better still though for those of us who were lucky enough to have a fishing-net in one hand and a jam jar full of water in the other, ready to put into it any minnows we might be lucky enough to trap into our fine mesh nets. The more brave ones amongst us would venture underneath the bridge at the cross-roads, where it seemed the 'red-breast' minnows preferred to be, remaining quite still without moving a fin, simply waiting almost for one of us to slip our net slowly beneath it and with a deft move lift it quickly out of the water. Seconds later it would be in the jam jar and the cry would go up "caught one"! or "got a reddie", the red-breasted ones deemed to be extra special.
In the Francis Frith photograph 'The Stream', the cross-roads bridge I refer to would be in the immeadiate foreground, thus is not in the photograph. In the distance in the photo where the road sweeps to the left, the stream in fact continues straight on for several hundreds of yards, under two more bridges. First one gives access to the north porchway entrance to St Mary's Church, of which one can see the steeple in the photo, while crossing the second bridge allowed one to gain access to both the southern porch entry into church and into the rectory gardens where one could see the moat which surrounded the old rectory.
Once beyond the two bridges the stream became much deeper and the careless boy or girl might find water going over the top and into their wellingtons. Few girls ventured into these depths, nor indeed very many boys. There was though big fish to be caught there, if only you dare go. Gudgeon! Probably two or two and half inch long, against the three quarters of inch minnow. A barbel hanging from each side
of it's mouth gave it a bit of a ferocious appearance. Catch it if you dare take it out of the net and put into your jam jar.
Another way in which the stream provided enjoyment was simply by having water races under the bridges. We would drop objects into the water at a particular point and see whose reached the declared 'winning post' first. It might be pieces of stick, tin cans, home made paper boats, whatever. Simple non-expensive entertainment.
After I left school at the age of 14 and a couple of months, I started work at a local farm. We used to obtain water at times from the stream. I would take a pony and trap, three or four milk churns in the trap, and drive down to the stream. At the side of the first bridge which accessed the north entrance to the church, the bank to the stream sloped down and I could drive the pony and trap into mid-stream. Using a milk bucket I'd taken with me I would fill up the churns. With the churns full it was difficult enough for the pony to then pull it out of the stream, especially as it had the slope to deal with too. So I would get into the stream myself and take the pony's rein, encouraging her and leading her up the slope and out onto the road.
'The Stream' then, could tell a tale or two. Finally I must mention that in addition to providing enjoyment for many hundreds I dare say, of boys and girls over many years, and providing local farmers with water when their own supplies from pits in the fields were at a low level, the stream was also a power source for the Miller at the Broughton Astley Mill. Way before the point where it had become my 'angler's paradise', the stream had tumbled into a dam where it became trapped and turned into a huge mass of unknown thousands of gallons. There it would stay until, at the will of the miller, it would be released through a sluicegate to power his watermill.
The Stream has served Broughton Astley well over many many years and I am happy to place this on record. 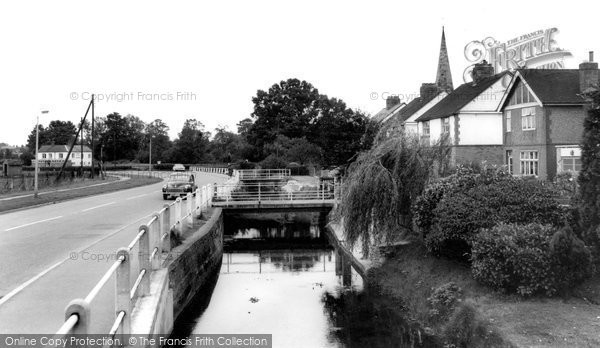