Mmemories Of A Better Cannock - a Memory of Cannock.

The pictures in Francis Frith nostalgic photos, bring to mind the Cannock I remember. Even the pictures from 1955, the year of my birth, show places I recall. I would go with my grandad and John Brogan, in the old open backed van, to Cannock station to collect the newspapers to be delivered to other newsagents and to the shop on St John's Road. My 'Uncle Reg' would sell the papers from the doorway at Fosters corner, just next to the Wolverhampton Road. I recall the secret 'bluebell wood' (which lay between St John's Wood Infants, where I went to school, and the hairdressers where my Nan would go to get her hair done). When I think this was just off the main Wolverhampton Road and pre-dated the building of the Avon Raod which made the Wolverhampton Road so much quieter, this is astonishing!
By the time the pictures of 1965 arrive the town is certainly the place I remember. I would walk the long way home from Walhouse school to go through the town. The walk would take me past the road to the library, with its itriguing stone sculpture of the sower, past the Danillo cinema, a truly wonderful Art Deco treat, which seemed so grand to me as a small child, but which later became the Saturday morning 'Chums Club' for us kids to watch serialised Westerns and films about superheroes. I remember not being able to wait till the next week!. The picture of Clarks store on the corner of what became the Avon Road, driven through St John's Road, where I lived at Lloyds newsagents with my Nan and Grandad, leaving it split in two, with a fence and kerbs preventng traffic from crossing to get to the Wolverhamton Road. The dreadful new bus station, which I would walk past on my way home from Calving Hill Secondary Modern School from 1966, its photo reminding me of the destruction of the old outdoor market, where I would have walked each week, years before, with my Nan to see characters such as the butcher who would show me how to drink a raw egg, whilst my Nan bought her meat. I remember the beautiful old Linford's shop and the woodyard at the rear - even then it amazed me with its timbered structure, visible in its entirity in the interior. I think the old pictures of Shoal Hill and the Tavern pub were the most poingnant, roaming it, as I did almost daily, as a child. I think I knew every inch of Shoal Hill before venturing further into Cannock Chase with friends as I got older. Those small glades and 'valleys' where we would picnic, the cows that would be grazed, the crisps and pop for a treat at the tavern and perhaps an ice cream from the van in the 'car park'.
They were simpler days. The town, its two cinemas, its shops and market, the park with putting green, tennis courts and bowling green and then later the snooker hall above Burton's made for a special place to grow up as a child and teenager, especially with Shoal Hill and the Chase on the doorstep. I can't say I have ever felt the same way about anywhere else since I left the town in 1980, but I would not want to return as the place I recall no longer exists. This is not the 'rosie glow of nostalgia' making my memory play tricks on me. The place I recall was real, the life I lived there was real, the friends I made there are real too, though most of them I no longer have contact with. I would not have missed any of it! 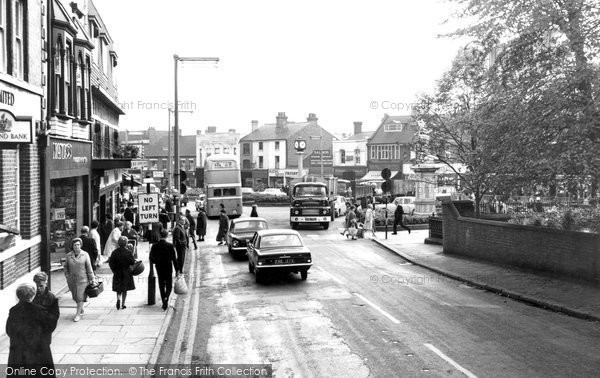