Just A Few Memories - a Memory of Darton.

My sister, Mary, was born in 1946, where I was born 1949. She'd take me on the bus from Royston to see some films at the Staincross cinema. The only thing that I remember was that it was somewhat run down but yet had a feel about it where you could say that it was once a beautiful cinema. Then I recall that my dad told me a story. A man who worked at Gawber pit would ride his bike down the Staincross Hill - It was some three hundred yards long. It was a few months before the 2nd world war; (Why I say this is because the Government had not started to order the compulsory process of taking down iron fencing and also gates or anything which could be melted down for the war effort) where iron would be turned into tanks, bombs and anything of the likes of weapons. This man anyway would ride down the hill at break neck speed. The only problem was that he had no brakes! He'd push his foot on the front tyre and try to slow himself down: the problem with this stupid idea was that gradual wear and tear upon the soles of his shoes were wearing down; only time would tell on what was going to happen next! Friction burnt a groove right through to his bare feet: travelling at such a speed prevented him from slowing down. He'd scream like hell not only to get people out of his way but in sheer terror? If anyone has seen the hill - at the bottom of Gawber Hill there is no bend on either side of the T junction! There is or was a row of houses which had decorative Iron fencing which was mounted on a wall which was two feet high? Hitting the wall at great impact the bike totally buckled up and he was to end up being impaled on one of the pointed spikes. He was to stay impaled for quite some time and was alive when some doctor arrived. The thing was that although impaled very little blood was showing because there was an almost perfect seal on his stomach. The Doctor said to him that as soon as he was to pull him away he'd be dead in seconds. He asked that his wife would be informed and that he loved her and then asked the doctor to pull him free - he died quick. 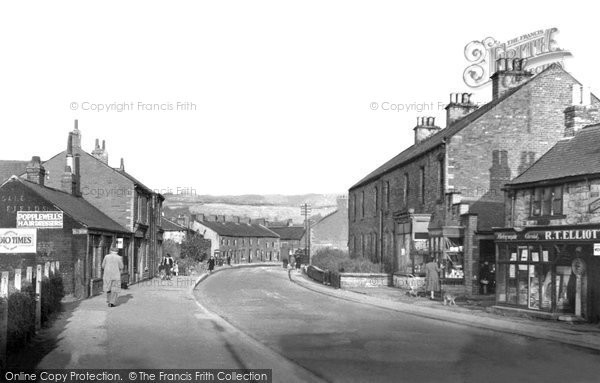