Totenham And Page Green School - a Memory of Edmonton.

Born in the North Mid like most people my age (1931), I lived my first 25 years at Tottenham Hale, at the end of Brograve Rd., facing the Station Green. The green had a nice fence around it before the war when hundreds of people crossed the green on their way to the Lebus Furniture factory that was on the other side of the railroad tracks. Ferry Lane started at the Hale and went east, through large reservoirs, past the historic Ferry Boat Inn and onto Walthamstow. It was across the Green at the bottom of Ferry lane where the police executed the young man in his car a few years ago.

At Tottenham Hale, there used to be a big island that contained a large toilet rest centre, a telephone box (Red, British style) and a sitting bench. During the war, a Static Water Tank was added to assist the Fire Brigade. This island was know as The Pound and in years before my time, I was informed that it was actually an Animal Pound. This come into the story because one night a 500 pounder fell into the Flateau shoe factory. The next morning, the Pound was covered with wooden heels.;

During the war, the Lebus factory switched to making wings for Mosquito fighter bombers and a section of the fuselage for the the Hourser troop carrying glider. My Mother was drafted for war work there and my Farther was sent all around the coast to repair staffed decks on war ships. Therefore my sister and I became latchkey kids.

From the railway bridge on a sunny Sunday 15 Sept 1940. a crowd of people with binoculars, looked south to see in the Battle of Britain on it's biggest day over the London docks.

I entered Page Green in 1941. A fantastic school with great teachers who were mostly retained at retirement age because of the war. This meant that they had wads of experience. G.B. Barrett, the Headmaster was stern but great. He dealt out the schools's corporal punishment with a cane and the max sentence was six on both hands. No boy will ever forget Mr. Bagley, who taught wood and metalwork. He had a length of 2X2 inch rubber the was known as his "friend", that could whack you across your butt if you were not working. Yet to a boy, everyone loved the man. Mrs, "Middie: Spooner, a gracious lady, taught Music in the Assemble Hall. The boys would play up and one day "Roy Collins" (unusual character) was hauled out front to sit on the floor next the her piano bench. As Middie stood up, Collins placed a large thumb tack on her seat. Six on each hand. Our Art Mistress was the very attractive Mrs, Doggett - She would set the lesson project and the sit on her table and read us a story. Every boy contrived to peek up her skirt. Other teachers, Smith, Sherringham Miss Mogg and the old biddie from hell "Muvver Martin". Gym Master was McKIe.

If you faced the school at the front, there was a school wing to the left of the boy's playground that had been turned into a "British Restaurant". It was a very large hall. On one side were workers from local factories and on the other, us kids.
We ate so much Shepherd's Pie that the county ran out of shepherds.

Around '42 or '43 Jerrie dropped a 500 pound bomb on the school, wiping out the wood/metal shop and a large classroom. In no time flat, things were reorganized and we never missed a beat. True Brit. Grit.

The biggest incident in the war for Tottenham, was two 'Land Mines" the Jerrie would drop in pairs by parachute. They were equipped with altimeter detonators that set the device off just before they reached the ground, creating a sideways blast. One of these would wreck six roads of brick built terraced house. One landed at Stoney South, less that a mile from where I slept in a back yard Andersen Shelter. It blew down six streets and I did not wake up. In fact, no one told about it and I learned of it by walking up Chestnut Road and looking down a side street.
These things must have been released at a very high altitude as it's twin landed several miles away.

We were co-ed but once a week, the boys marched up Tynemouth Road to the Town Hall and swam in the 'Munnie" baths. Then there was the "LIDO", a wonderful Olympic size outdoor pool, where a boys right of passage was to dive from the ten meter board. I jumped ten times before my first jack-knife - I was twelve.

Around 1943 I joined the Middlesex Regiment Army Cadets (The Die Hards). We paraded in our playground, where as Lance Corporal, I lost my choirboy singing voice by screaming out drill instructions.

6 June 1944 (My 13th birthday was the 5th.) was a day to remember, even in Tottenham. As far as one could see from left to right, from front to back were layers of planes, some pulling gliders, all going east. No one had to tell us what was happening.

I really loved school and was to stay on for an extra year. However my Father was dying and I hopped across the road to the Flateau shoe factory and started work on 14 Jan. 1946

In '45, G.B.Barrett appointed Elsie Wilson (a young lady with a most formidable character) and myself as School Captains. (I still have my badge). I would gamble that Elsie had a successful life.

A parting heartbreak at P.G. was that the after the war Inter School football was introduced and the morning that I entered the playground to announce that I was all done and would start work next day, there in the playground was a board and easel announcing the team of which I would be captain. They played Roland Hill and I never learned the result.

Now, the war has ended and my age group all work for a pittance, formed a Sunday morning football league team and never missed a Spurs game until we all get "Called Up" for His Majesty's Service.

That over in 1951, all the boys took dancing lessons so that we could meet the girls.
We were so lucky the have the "Royal" dance hall in Tottenham. The music never stopped. As the orchestra took a break, the stage revolved and on came the "Dennis Coe Quartet" with Bookbinder on the Xylophone -- Just magic.

I Immigrated to Canada in 1957 and the U.S. in 1964, but my life long memory will always be that the only place in the world to be single in the 50"s was Tottenham.

Thu Nov 2nd 2017, at 10:56 pm
christinesnnhill30851 commented:
My birth Mother Margaret Theobald was born in Edmonton 1932.The family moved to 13 Kelland Close Park Lane. I was born 1951 in The Whittington Hospital.My father was Herbert Smith of 10 St Josephs Road.They both worked in a laundry . She was Typist and he was a Mechanic.Later on be had his own garage in that area.Does anyone remember them.????????
Add your comment
Report abuse
Tue Oct 3rd 2017, at 2:33 am
Cheryl Tomlinson commented:
What a great narrative, Peter. Thanks! 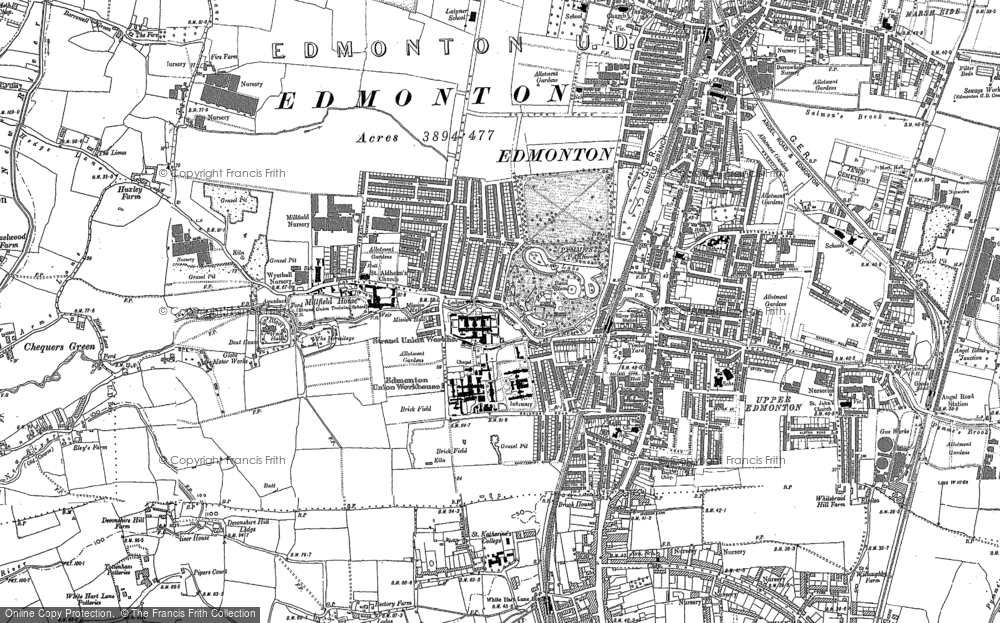