A Memory of Huntingdon.

A truly old-fashioned type of ironmonger and household ware store seen here on the immediate right of the picture. My mother, Mrs. Ruby Chandler would have been working here in 1965, as she did for many years both before and after '65. If you couldn't get it at Osman's you couldn't get it anywhere else, either. The shop premises were very old, and when it rained, there was panic up in the storage rooms above to place buckets to catch the leaks.
I remember, too Stiles, the Bakers, further up along the High Street. My grandfather and I walked into Huntingdon from Alconbury (the only way to get there) on my 9th birthday in 1941 to collect my birthday cake, supplied during rationing times.
Almost opposite Osman's was Cox the County Clothiers, who supplied my uniform for Huntingdon Grammar School a couple of years later.
Huntingdon once boasted two cinemas, The Grand, accessed through an archway beside Murkett's Garage, opposite the Market Place, and The Hippodrome further along the High Street, on the opposite side to Huntingdon Brewery.
With the High Street also being the main road from Cambridge to Peterborough there was considerable traffic at times, although these photographs show very little, and for two buses to pass one another, one often had to mount the pavement to squeeze past.
Now, with the main road outside the town, the High Street has a totally different character, but many of the old shops are gone, replaced by the ubiquitous chain stores, and the town is no longer the County Town of Huntingdonshire, more is the pity. Now on visiting Huntingdon as I do on trips to England, I feel a stranger in what were very familiar surroundings. Such is progress ! !

This memory is written about Huntingdon, High Street c1965 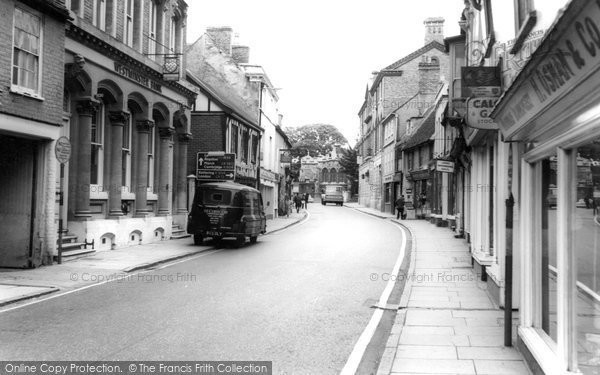 Hello Barry,
I don’t think we ever met, you being a few years older than me but I knew your mum and dad well. Apprenticed to Freddy Corral at the beginning of 1956, I worked at Osman’s until 1961. It was a great place to work, however when my parents, and me, moved to Peterborough in 1958, a forty mile round trip six days a week fifty weeks of the year on those buses you mention, not to mention the cost, together with heading towards marrying my girlfriend, Jackie Love, from Huntingdon made it necessary to seek an income nearer home. I’d best not start on the story of Bill, your parent’s lively Springer of the late fifties, and Fred’s hat!
Near neighbours of Osman’s, J. Hedges Stapp, Cherrisons, Burtons the Grocers, Penberthy’s Chemist, George Barber, Winfields, Mrs. Bangs in the cake shop opposite. All come into our lives briefly and go out again while so many of the once busy shops are now boring estate agents. Shame!
Stuart Sims.

By Stuart Sims on Sun Oct 18th 2015, at 4:31 pm
Contact User
Report
Hej Stuart,
Excuse the Swedish manner of greeting. having lived here since 1960, altho' still a Brit, I am pretty well into the Swedish way of things at 83 ! ! I recall your name, as Mum often spoke of you, but no, I am not sure we met up.
Huntingdon has changed considerably since those days, as has most everywhere, and sure, the bus trip from P'boro to H'don each day would have doubtless postponed your wedding for some time.
That you should mention Bill - who met an untimely end much to Mum and Dad's great sorrow. Especially Dad as he was very much Dad's dog.
Funny, too, you should mention old shops now becoming estate agents. Back in 2006 I visited Reigate where my granddad was born. My great granddad, Joseph Chandler had had a butcher's shop on Bell Street, and I had just acquired a book in which there was a photo of the shop. There was then a florist's shop on the same site, and I had just gone in and bought some flowers for my cousin's husband who had a birthday that day, and we were on our way to visit him. You can perhaps imagine the feelings I felt at the sudden knowledge that I had unknowingly been 'into the same premises' as my great granddad's home and shop. A couple of years later I visited the street again - via Google Earth - and saw that the shop had changed hands. To an estate agent. Such is life.
Peterboro' too, has changed considerably. Up until 1960 I was in the DO at Perkins Diesel, and so was frequently in the city, but on each subsequent visit have seen many changes, leaving me more and more confused as I no longer felt that I knew the city any more - just as with Huntingdon. Hopefully you are still 'at home' there with your family, Stuart.
Thank you for sharing your memories also.
Here, on the west coast of Sweden, I am living out my retirement, and even here so much has also changed since my arrival in '60 and much is unrecognisable from those early days. That is life - for better or for worse as they say.
Barry.

By Barry W J Chandler on Mon Oct 19th 2015, at 10:26 am
Contact User
Report
Hello again, Barry,
I'm sorry to read that Bill came to that untimely end. He was a character - he bit through the live kettle lead at one time resulting in copper plated teeth. He swallowed your mum's watch and she was a little miffed that the vet, Mr. Hall, told her she had to be patient - she couldn't hurry the passage of time!
Regarding another story involving Bill, I'd best not tell you about that via this medium. I keep an email address specifically for passing on via a public medium if it would help to respond via that. stutwo@talktalk.net If you do, just include a bit of information in the heading I would recognize that no on else will know.
My wife, Jackie, and our daughter moved to Bournemouth in 1983, where we remain to this day. We travel to Peterborough about twice a year and are completely lost there. When first married we lived next to a Perkins employee who gave me a pair of leather foundry gloves to help me clear brambles in our new garden. My daughter has the gloves now for dealing with her rose bushes - nothing gets through those!
Cheers, Stuart.
By Stuart Sims on Tue Oct 27th 2015, at 11:55 am
Contact User
Report
Stuart and Barry
Hello - we lived in Huntingdon from 1955-1959 and again from 1962-1970. As a child I loved to go to Dudney & Johnson on the High Street and buy Jaffa Cakes. Loved to go to Shepherds Café and eat. Some of my best memories. Had a black lab at the time who stole a string of pork sausages out of a ladies shopping basket as she was leaving Butters Butcher shop. I went back about 5 years ago and it broke my heart to see virtually nothing I recognized and they knocked down buildings to make way for some sort of small food court. I remember a very old period building that was knocked down there. There was a small courtyard with a paint store (Ockendens?) and it was called Newtons Court.
By Johanna Ruest on Wed Sep 21st 2016, at 2:22 pm
Contact User
Report