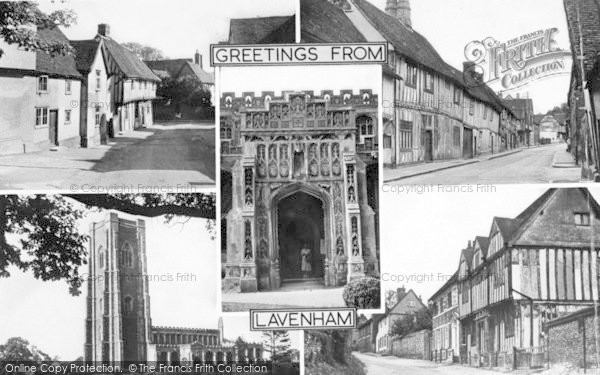 Buy "Lavenham, Composite c.1955" available as a print on its own along with framed and canvas options.

The Make Up Factory

I worked at Holloways a couple of times in the early 1980's. We used to catch the works bus in from Stowmarket (where I lived). We would go miles and miles through Thorpe Morieux, Rattlesden, etc, to pick gals up. I would go to work in the dark and get home in the dark!! It was a long day - I used to catch the bus in (...Read full memory)

I was only 8 when I last visited Lavenham, my dad Basil Edward Garrard (known as Ted) was born there, and I used to vist my relations Pat and Chris who lived in Water Street. Does anybody remember him? He was born in 1921, but moved to Stafford in his teens. He also had a sister Rita. His father was a carpenter. He was also related to Josie Garrard, and I think Pat who once used deal in antiques.

Back to Lavenham
Back to all Lavenham Photos