Wading In The Bristol Channel - a Memory of Lavernock.

It is quite possible that the the little boy to the right in this picture is me at age six. My family used to stay at a friend's caravan in the park above the cliffs. During the summers of 1954 through 1958 we stayed there most weekends in the summer and even a few in the spring and autumn. St. Mary's Well Bay was not a good beach, a lot of rock and bladderwrack seaweed, which does give a satisfying 'pop' when you stand on it. My brothers and I would play for hours along the seashore between Lavernock proper about a mile to the east and Swanbridge and Sully Island to the west. On the cliffs above this picture, which is looking north-east, was the "army camp". This was a shore battery with large concrete emplacements (sans guns), officers quarters, and other buildings deserted since the war. The gun batteries were connected by tunnels, probably to move the ordinance, and we had a lot of fun exploring them.

I recall the time as one of great freedom. My Mum would let us go and do whatever we wanted totally unsupervised all day, just coming back fro something to eat. Given the enormous tidal reach of the Bristol Channel which would catch and drown a few people each year, the crumbling cliffs, which we climbed with gusto, and the decrepit military camp (now a "resort"), it is fairly surprising we did not get into some trouble. I am not sure I would allow my six year old such freedom, but it was magical at the time.

I revisited the area a few years ago and both the ramp and the steps to the beach have gone, destroyed in a gale. The caravan park is a private resort with a barbed wire fence around it. The beach has even less sand than it used to have, and is even uglier than I remember, but then nobody goes there anyway. The hotel at the top of the ramp burned down many years ago and was not rebuilt. Even the snack shop has gone. People can only get there by driving, the rail line (steam trains, of course) which used to have daily service between Penarth and Barry, closed a long time ago. The tiny Lavernock station is gone, and I don't even think the track is there any more.

As you can see from the photo, many people used to visit in the 1950s, including one little six-year-old manfully braving the cold waters of the Bristol Channel. But no more. 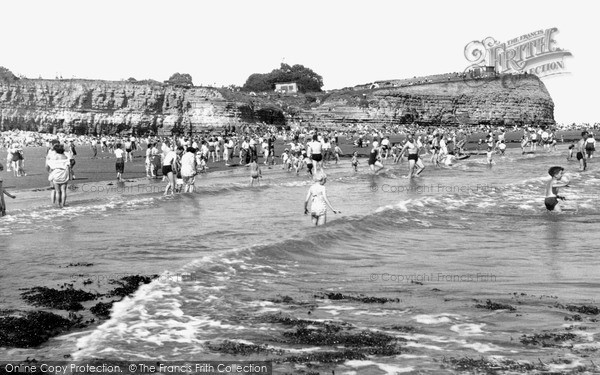