Good to see DeMontfort Hall as it used to be. It was a great venue to see bands there. Once the small blues clubs had ran their course bands needed larger venues to ply their trade, De Montfort was one of the first, I saw Rory Gallagher, John Hiseman's Collesseum,Yes, Sutherland Brothers/Quiver and never to be forgotten Free (when they reformed briefly) the last band I ever saw before the modernisation of the hall was Uriah Heep with a rather drunk David Byron fronting the band. Other major bands to visit DeMontfort were Genesis, Supertramp and the most under rated bunch of musicians to ever grace these shores The Sensational Alex Harvey Band (God rest his soul)
Today Demontfort is an all seater venue, no more standing on the dance floor! I liked the venue but on my last visit it had become a bit sterile with anyone wishing to show any emotion for the music rocking awkwardly in their seats. I'm afraid DeMontfort has obviously needed a make over for many years but in doing so (like so many other venues) has lost it's soul in the process. The only simularity to those 70's years is the rush for the bar in the interval although now it appears to be well dressed men and women thrusting their money under the barmens nose...........God ! maybe one of those well dressed men could be me.......I TAKE IT ALL BACK !!! 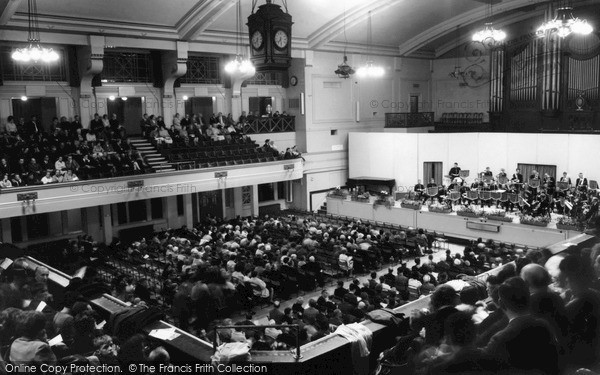