Australians On The Cut 1975 - a Memory of Leighton Buzzard.

Having left Australia on an open-ended working holiday to England in January, 1974 with my girlfriend, it was hard to imagine that within six weeks of arriving in London we'd be living on a leaky old narrow boat in Braunston near Rugby, and that six months later - still living on the boat - we'd be calling Leighton Buzzard home for nearly two years.

The boat was called SADLERS WELLS, and in the opinion of most people, she looked more like a railway carriage than a traditional narrow boat, obviously the result of some DIY conversion of years gone by. She became ours for two hundred pounds after answering an ad in Exchange and Mart. Work opportunities in Braunston were slim, so we decided to move to within easy commuting distance of London for more work options. The major problem was that our home did not have a motor. It had never had one - this was a converted butty, the boat that's towed by the motor.

So by pulling, poling and the occasional tie to a motor through locks (not to mention a hair-raising rudderless tow through the tunnels between Braunston and
Stoke Bruerne) we tied up at Leighton Buzzard, where we set up home. We were advised that taking the boat further south would incur more interest from the British Waterways Board, and that our semi-legal, semi-residential status would be under threat.

Our mailing address was C/o Faulkners Store, work was found at a local nursing home, the Firestone warehouse and eventually the Post Office. We became part of the canal community based at Leighton-Linslade.

Now thirty years later, long back in Australia, with the advantage of the internet and sites like this, I often scan images of the British Waterways and recall our times on the canal at Leighton Buzzard...and wonder whether the boat people we got to know so well are still around...

...the Faulkner family who ran the store at the canal bridge...Tim and Andy Collier who were still carrying coal in winter, and doing camping canal holidays in summer...Andy and Richard, the boys from Luton who had a narrow boat called YORK...Laurie, the London businessman who lived alone on his small boat...the Griffin family who ran the Wyvern Shipping Company (on their website, I see they're still operating)...so many others we had got to know during our time there.

We came very close to staying in Leighton, nearly buying a house in Bideford Green, but at the last moment decided we didn't want to make such a permanent commitment to remaining in England. We sold the boat to an enthusiastic young couple from London who worked for Time Out, for 100 pounds! Unfortunately, in their enthusiasm to undertake much needed repairs to the hull, they opened up old leaks and the boat sank a couple of weeks after they bought it. We had moved to Luton by then.

Six months later, we boarded the SS Australis at Southhampton, bound for Sydney. Our last encounter with a canal was the trip through the Suez on the ship.

I often wonder how long the half-submerged SADLERS WELLS remained where it sank just down from the Linslade bridge. We revisited the sad sight just once after moving to Luton. We never saw the new owners again. 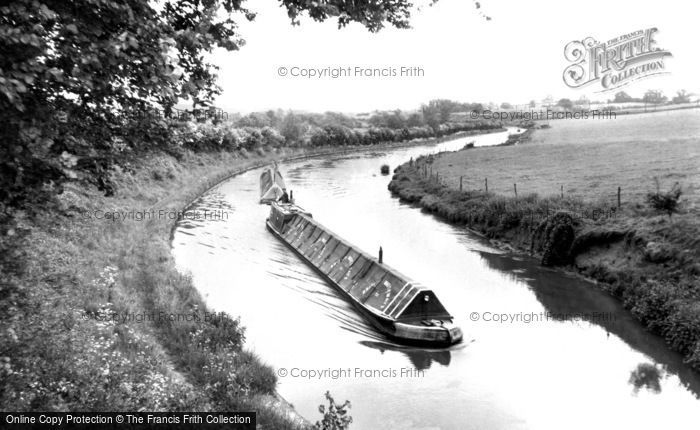