Memories Of Sandy - a Memory of Sandy.

I lived in Sandy between about 1963 and 1979 and have seen changes even in that short time. It was a fairly quiet village when we first came in spite of the adjacent A1. I went to St Swithuns school in St Neots Road, then Sandy County Primary School and Sandye Place (Sec Mod) school. There wasn't an awful lot to do in those days, only the rec' or the Sandhills to go and play. The old corn mill was still standing, but it was overun with rats and mice - not a nice place to linger too long even just to look at the mill race and the cows in the surrounding fields. One of the best events of the year for me, was the annual Sandy Carnival, because the parade of floats which started on Western Way estate, we would sit on our front lawn and watch the parade start. Prior to electrification, the railway station at Sandy still had the quaint old fashioned gas lamps,(lovely and cosy in winter!) a middle island reached by a wooden bridge, and original dark blue signs dating from the LNER era. I remember the closure of the Bedford to Cambridge line, and the enormous fuss made, also the opening of the Roundabout Club. On the opposite side of that road between what used to be Leeds Smith and Woodfine's solicitors, there was a large old house, and the big conifer tree that now stands on the island was just inside the boundary of the garden. They had stables at the back, and I can remember seeing a horse poking its head out! There was Mundays newsagents on the Market Square and next to it Gunns bakery (still exists I believe). There was the little cobblers shop just along from there (had innumerable shoes mended there), and where the Chinese Restaurant is now, before that was a supermarket(Co-Op?). Even before that there was a monumental masons yard on the site with the statue of an angel and a blank gravestone standing just inside. There was an old gnarled apple tree growing in his yard, and a favourite dare of us kids was to try to steal an apple from that tree - some hope, he always caught the miscreant! Next to that was formely Jordans Corn Merchants(later coal and coke), for years they had a large blue sign that used to hang over the entrance, all that remains is the tiny former office next door. There were the subterranean loos (only to be used in the direst of emergencies!) on the parade of shops up the steps. On the opposite side there was always a newsagents on the end and further along used to be Fontaine's hardware shop and on the opposite end next to the library was a wool/cum babyware shop. Pubs - the Lord Roberts, spent quite a bit of time there in the long hot summer of '76, and the Red Lion (now demolished), Bishops supermarket in the High St which relocated from its original site on the Market Square, before that too was demolished to make way for the shopping precinct. The betting shop next to it, Yvonne's hairdressers, the chemist shop and on the end Gale's electrical store, (bought lots of my '45' records there). On the other side of the precinct was a florist (Kettleborough's?) and another dark olde-worlde type chemist with a barbers shop in the back. Next to that there has always been a butchers shop on and off for years, and finally on the corner of the High St and Market Square what used to be the old Post Office. It only had about 3 counters and particularly on Saturdays the queue used to go outside the door and round the corner (no fun in inclement weather). On London Road opposite the Kings Arms pub was a little grocery shop for years, and further along opposite where the old church formerly stood was Housdens bike repair shop. On St Neots Rd, on the corner of Longfield Rd, there was (and still is) a grocery shop, and the house immediately to the left, now a private house, was Hamiltons sweet shop. I often stopped there on my way to school to spend my pocket money. Further down that same road for years was Sidney C Banks the grain merchants, the fish and chip shop (in one of its many incarnations) on Park Rd that had at least 2 fires over the years if memory serves. Elizabeth's clothes shop in the High St, the cafe on the corner of Park Rd and the High St, Dudeney and Johnson's (pricey) supermarket on the Market Square. The fish and chip shop opposite St Swithuns church was formerly a bicycle shop, and of course Seamers funeral directors and Gilbys hardware shop, who seemed to have been there since the year dot! Further up towards the station was Stan and Eileen Thompson's paper shop cum hardware, Sait's newsagents, and on Ivel Road the fire station. There is a large house on the corner of Windsor Way and St Neots Road which, when we first moved, was a Scout Hut which could only be reached by a muddy track! At the end of the road further along from St Swithuns school is a housing estate standing on what was formerly called Feltwell's Field. I don't know what was there originally but I only remember it as a weed strewn rubble filled wasteland.

Tue Oct 17th 2017, at 1:00 pm
jonjenwinn commented:
Hi sue, this bought back so many memories. We lived in Sandy from early 60,s to 1970 when family moved to Australia. We first lived in Belham way and then in Glebe Close. Remember so well that apple tree, when the masons finished we were able to gst some apples. John winn
Add your comment
Report abuse 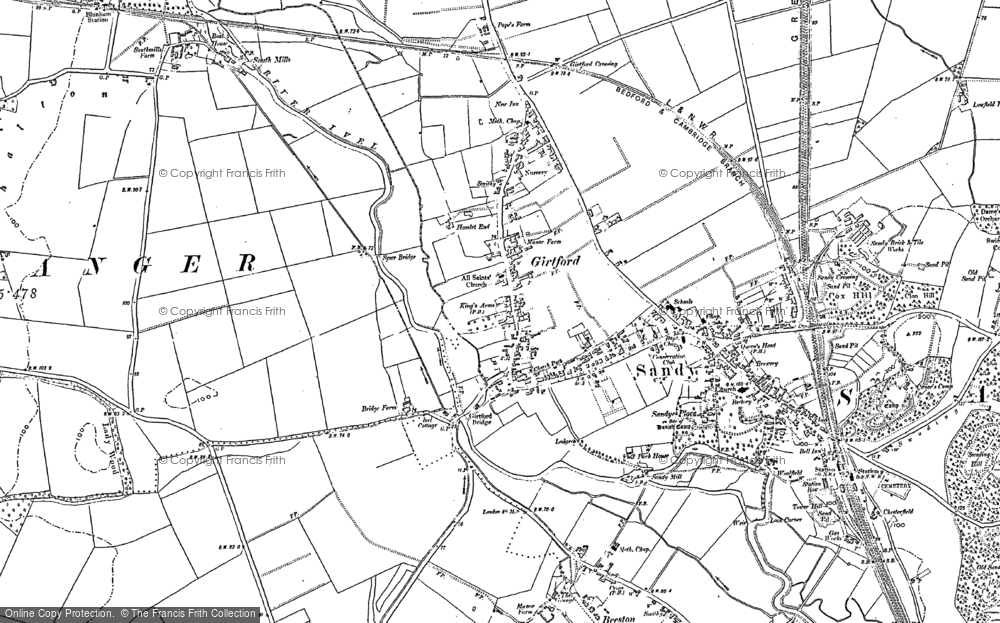