Etchingham Banks - a Memory of Ticehurst.

I lived on Wedds Farm from around 1948 to 1963. My father, George Couzens, a wartime Battle of Britain fighter pilot, was manager of the farm which was owned by Mr A. Howeson. They had met in the RAF during the war.

I believe that the photograph would have been taken c1960. The farm certainly had had a milking herd which made way for pig rearing, and the cowshed became one of a number of buildings used for raising chickens. Strangely, the small section of field visible on the left of the photograph had recently been rolled. And around the years mentioned above I was entrusted with rolling that field, although perhaps not doing the job too professionally! Memory suggests they were marvellous years, and the field shown was the ideal sledging venue during the winter.

I now live in Ardara, Co. Donegal, Ireland, but the two Francis Frith photographs of the field (1903 and c1960) hang on a wall of my house to remind me of a very pleasant youth. And when I return to Sussex I often walk the public footpath through a changed Wedds Farm. 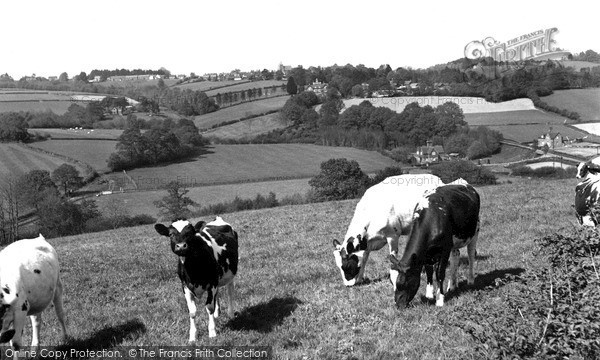