Fun On The Broadway - a Memory of Tolworth.

I also have vivid memories of tolworth as I lived over the shops, waters the green grocers near the wimpy bar
As a very young person I remember going to the nursery on the corner of fairmead.
I remember playing in the fields behind the cinema and on the opposite side near the new underpass, I used to go to Saturday morning pictures at the odeon, When the new bowling alley opened it was great fun, my dad worked at the blue star garage and also at goodriche hardware store, we all had to go to the Bryants shop for our school uniform the only place that sold it, for tolworth infants school in red lion road and tolworth girls school. The uk tea shop used to sell us the bags of Broken biscuits, mac fisheries was the wet fish shop with the smoke house out the back I'm still in contact with the managers daughter, there was a nice fish and chip shop behind the main broadway shops near jobs dairy that we would go to after a swim at the surbiton lagoon they would sell us chips with crackling (batter bits) on we couldn't afford the fish on our pocket money...sainsburys I would watch the ladies with their hair nets on patting the butter into blocks, the old fashioned sweet shop next to victor towers where they would sell you 2oz sherbet or even 1 woodbine....
I remember the floods and also the water spout which went as high as the second floor outside Sam cooks green grocers when the pipe broke
The trolley buses were always losing their (long things on the top of the bus) overhead connection - , I started working at the launderette and fine fare the shop under the tolworth tower while still at school and after I left school in 1965 I worked in the offices above.
Mum and dad used to go dancing in the catholic hall, we used to go dancing in the at the back of the Blackmoor pub chessington, the coronation hall kingston, the toby jug pub and the bowling alley.
Mum who is not with us now always said tolworth was spoilt when the council put the central barriers though the middle of the shops and built the subway, so much for progress the council are now removing the barriers and improving the area only 40 years too late.
my 3 sisters and I are all still not that far away and still have some good memories.

Things I have forgot I brought my first record from the new record shop same side as
tolworth tower, beswicks was the bed shop, the post office was near the wimpy bar until the new block past beswicks was built then it moved , Etams was I very small modern clothes shop they would sell the latest twin sets ( jumpers and cardigans to match )

Sent from Terry and Steve iPad 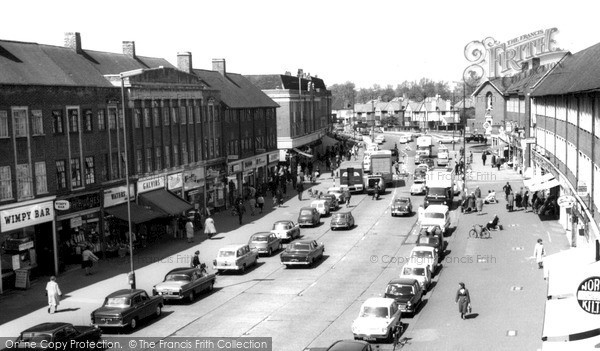