Wonderful Experience spent my sixteenth birthday at the school, Memories fade, I believe my house master was a Mr Morrell? My badge was all blue, I had to go to his room for my assessment sat in front of a blazing log fire. We had a lecture by I believe a famous mountaineer (the 1st Ascent of the Mustagh Tower!!?) one of the instructors, had a red sports car, spent a lot of time fishing in the Tarn, and was writing a "treatise on Tarn Trout" he had a airforce type moustache, and the only other name that comes to mind was a Terry Parlby. I was sent to the school Via a bursary from Leeds county council I was a Youth leader at Allerton Grange Civic Youth Club, and taking the Duke of Edinburgh's award test, subsequently my athletics record at Eskdale was a great help!! All in all this was a life altering experience, I continued to climb mountains and descend potholes, fell walk and encourage other youngsters at the civic youth club until i went to sea as an engineer officer. One of the best memories was the tinned Keillers Dundee Cake sent to me at the school for my Birthday ( don't get me wrong The food at school was unbelievably nutricious as it had to be considering what we had to do, the cake was a treat, also was my introduction to Grape Nuts Cereal, Kendal Mint cake and Flap jack. The grape nuts to be added to soup etc as a bulking agent, but I still love the stuff even though it now costs the same as a weeks wages i received when working as one of the 1st Apprentices At Royal ordnance Factory (Thorpe Arch) after the war. It was like eating road grit But delicious, Philip Allan Wells, (AKA Algy Wells) 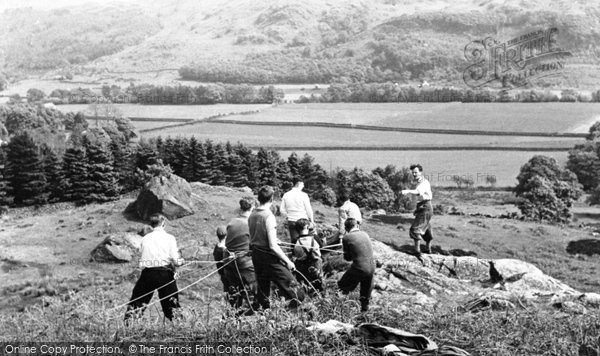