This scene of the old fishermen's beach huts shows my family's beach hut on the left.  The lady just about to enter the beach hut was my grandmother, I am playing on the beach and my sister is in the pushchair next to the lady.  Families had all the necessary facilities in the beach huts and almost every day of the summer holidays was spent down there.  My grandfather belonged to the Angling Society and there were frequent fishing competitions between the Society, the Ambulance Brigade, the Fire Brigade and the Police.  As a child, I was given the job of polishing the silver cups presented to the winners.

This scene has changed vastly since the 1950s.  A sea wall was built after the 1953 flood which restricted our view of the sea from the beach hut, and the huts, after being left to become derelict and listing at frightening angles during the 1980s, have now been rebuilt and refurbished as holiday chalets.  Originally, there was a six foot drop from the sea wall promenade down to the beach, but now, as an extra defense against the threat of flooding, the beach has been built up to the promenade and the beaches have been taken over by yachts and boats of all descriptions instead of laughing, playing children.

Tue May 2nd 2017, at 5:51 pm
C Traill commented:
So pleased you are OK. Live in Ashford but still visit Whitstable occasionally [ and still do the shipping news for the local papers too -- 52 years!] but it has changed so much and been thoroughly spoiled. It is good --and important -- we have our memories; times may have been hard then but we appreciated things more [even buying a water pistol from Chapman's novelty shop in Harbour Street!]
Add your comment
Report abuse
Mon May 1st 2017, at 3:18 pm
Jan Talikowski commented:
Hi Charles, sorry to hear about your wife, but pleased she is better. I'm afraid my memory is not as good as yours and as we were down at the beach hut every summer for numerous years, the children who visited during the holidays are a distant memory as far as names are concerned. You are correct in all your remarks, Chris & I lost mum when I was five and Nan brought us up, Dad worked in what had been grandpa's fishing tackle shop, and I worked in Valente's in Tankerton when I was 15 (7 days a week for a fiver!) but the icecream was lovely. I live in Essex at present, but visit Whitstable regularly as I miss it and miss living by the sea! Regards Jan.
Add your comment
Report abuse
Sun Apr 30th 2017, at 1:29 pm
C Traill commented:
Sorry, Jan for the delay in replying;. my wife developed breast cancer so everything else 'went out of the window', in the meantime. Now she is better I can return to previous items. I used to spend the summers with my grandparents at Sea View Bungalow. If I remember correctly you also had lost your mother [and your gran cared for you and your sister] so you were a sort of kindred spirit. Your dad had the fishing tackle shop in Harbour Street next to the Bear and Key. The last time I saw you, you were working at Valentes off Tankerton Circus [? as a Saturday job] Wonderful Ice Cream there!
Add your comment
Report abuse
Sat Mar 21st 2015, at 12:43 pm
Jan Talikowski commented:
Hi Charles, your name doesn't ring a bell I'm afraid, but I am the Jan Horsfield who spent most of the summer weekends and holidays down in the beach hut with my Nan and sister, Chris, both sadly no longer with us. Can you let me have any more details? Did you have a younger sister? I have a photo that could be you if so. Regards Jan Talikowski
Add your comment
Report abuse
Sun Mar 1st 2015, at 5:12 pm
oastfen9 commented:
I wonder if you are Janice Horsefield whom I remember when visiting Whitstable and playing on the beach when on holiday in the 1950s. Charles Traill
Add your comment
Report abuse 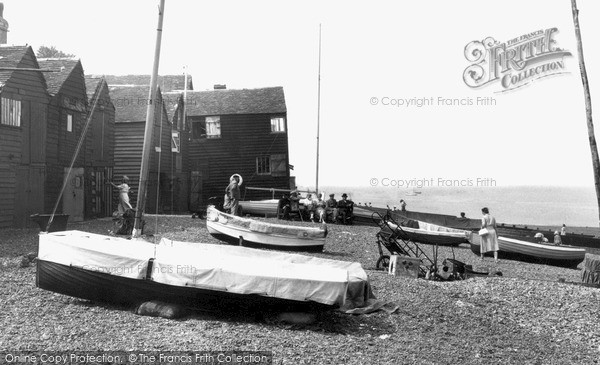