Highcliffe Road - a Memory of Wickford.

My parents moved to Wickford in 1955, we had a bungalow built in Highcliffe Road, by local builders the Gunnets, and my sister was born there in 1956. It was a lovely place to live, across the road and a short walk where a few shops. A general store, a butchers and a newsagents, which then was run by a Mr Lovekin. The other way up the hill was the Hilltop Stores run by Mr and Mrs Usher, their son was Brett, I remember them because he became an actor, and us girls loved going in the shop just to see if he was home ! He was rather good looking, or so we thought. My mum got on well with them and they were a lovely family. I seem to remember there was a market garden opposite, and a bus stop. Nearby the store was a ramshackle bungalow owned by a lady who I ashamed to say we all thought was a witch... as in the genre of children, she would sit outside and wave and we were all dared to wave of course. I went to the C of E school down the hill, and then went to Beauchamps School when it first opened. It was all very rural then and to walk into Wickford itself involved passing quite a few fields with cows and I have the fondest memories of just being there. It was walking to school one morning that we all were bomb shelled by the death of JFK, one of those events in your life which stand out, like the death of Princess Diana and the Twin Towers. Beauchamps ran a Saturday Club, to which we all belonged ran by Mr Richards our Geography master, Miss Harcombe and others. They ran coaches to local venues, mostly Southend when we saw the latest groups of the day...in the 1960s too many to mention, it was all good fun. I went out with my first boyfriend there, Steve Warner if anyone remembers him, he was in my class, he was dared to kiss me after the year end dance and he did, much to my and everyone else's surprise. I had some great teachers at that school, Mr Richard, Miss Evans, Mr Lovelock, Mr Miller, Miss Harcombe, Mr Weeks... the memories come streaming back. Mr Richards was Welsh and every year he would arrange to bring a Rugby team from Wales to the school to play against our boys, but how different those Welsh lads were! We moved away during my GCE year and I hated my parents for it. But I grew to love my new home, whilst retaining a great love for Wickford. I came back to the school in 1984 for a school reunion, and have since been back recently to see my old home, they say you should never go back and they are right, it has all changed to too much for me, I prefer the old Wickford, still a sleepy market town. The photograph I believe is of the top of Highcliffe Road, and we lived further down than that,almost opposite Apple Tree Way......memories, memories. 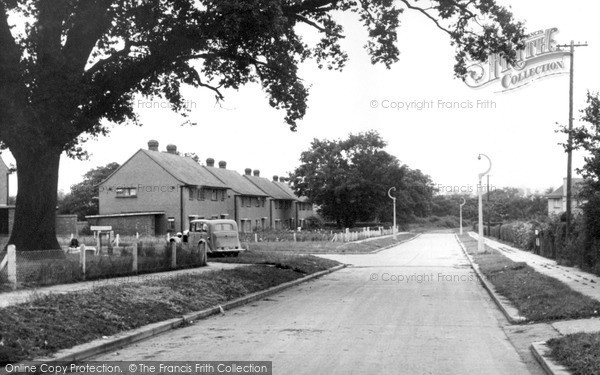