Living In Wickford - a Memory of Wickford.

Up until I was 4 years old we lived with my Grandad and my Aunt Ena at no 2 Deirdre Avenue (now no 9). My Dad and Grandad had a small holding and people came from all around to buy their fresh vegetables, these would be classed as organic nowadays. My Aunt  Ena also helped out with the vegetables, when she wasn't  working at the kiosk on Wickford Station. She later married the station master George Walker.
At that time there use to be meadows on either corner of Deirdre Avenue and a stream running down to London Road. In the summer the meadows were full of buttercups to run through and play in.
In 1949 when I was 4 we moved to the house on the corner of Highcliffe Road. This pair of houses  were the start of Highcliffe Estate and the first to be completed by the apprentices, and there is a plaque on the front of the house showing this. There was a special ceremony with the Councillors handing the keys over to my parents.  My brother Peter and I went to the little Church school on the corner of Mount Rd, and I remember there being 5 girls called Christine in my class. The headmistress was Miss Green and music teacher was Miss Jones, we also had Mr Beadle and Miss Worcester.
When I was 11 I went to Secondary School in Market Road, we walked home for lunch each day, we just had time to eat lunch before it was time to walk backto school. it did,n seem far to us then as we were used to walking everywhere.  When I was in the 3rd year the school was overcrowded and we were taken by buses (like the one in the picture) to Fryerns School in Basildon, while the new Beauchamps School was being built.  This was great as Wickford flooded so easily that any sign of rain meant we had to leave early in case the water got to deep to get home. But no matter how quickly we left Fryerns, Nevendon Rd was always flooded when we drovw through.
Most of our school holidays were spent at the recreation park. mothers did not have to worry about their children then like they do now. We just had to be home when told for lunch or dinner.  If we wanted a change from the park we would  walk up Wick Lane and  go over to the Wick to collect blackberries. We always intended to take them home for a blackberry and apple pie but usually ate them as we picked them.
The 1953 and 1958 floods were very bad for Canvey and all around, but to us Wickford flooding was a way of life, it happened so often winter or summer, and when it did, the park would be one huge lake with children jumping off the park seats into the water, or you could walk down Southend Rd and spend all day watching the traffic trying to get through the high street that had been turned into one big river.
There use to be a field where Franklins Way and the houses in Long Meadow are and this was where the circus and fair would be once or twice a year.
The first job I had was at Layland & Thorns estate agents,( where Aldi is now) and opposite was a lovely cake shop.  Apart from Adrians where I bought my first record (Apache, by the shadows) I also remember Franklins the butchers. and Adcocks the Newsagents.
I moved away from Wickford after getting married at St Catherines, But we have now back and although Wickford has changed a lot there are still a lot of things here that bring back memories. 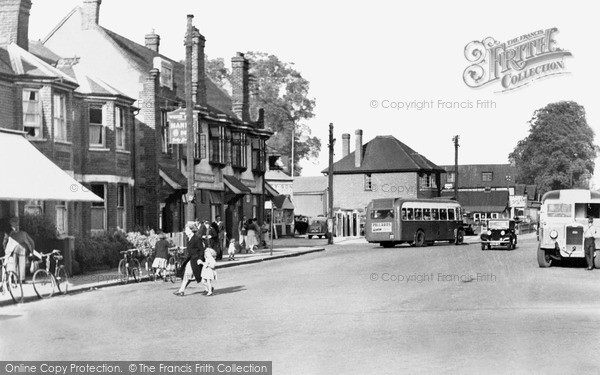