The Happiest Days Of My Life - a Memory of Wingham.

My  maternal grandfather, Archie Greatorex, was the licensee of the Anchor Inn from 1957 until his death in September 1974. Most of my family holidays, until the age of 10, were spent with him. My parents used to pack my sister and I up and we would catch either the coach or train from London's Victoria to Canterbury, thence by number 13 bus to Wingham, where we would be deposited right outside the front door. How did my parents manage with two small children, large suitcases and, if it was Christmas, reams of presents as well?
If it was summer, Archie, and his partner, Mill, would have a week away somewhere while my parents, Fred and Vera, looked after the pub, then, upon Archie's return, we would have a week of days-out by 'bus. Most-visited places were Ramsgate, Margate, Canterbury and Whitstable. I particularly loved the model village at Ramsgate and the boat-trips on the River Stour in Canterbury.
Lovely memories of blue sky days spent playing in the garden at the back of the Anchor-it never seemed to rain; the two dogs, Chummy and his daughter Patch; Blackie the cat, Archie whistling under his breath as he went about his morning tasks preparing the pub for opening; going to bed tired but happy after all the fresh air; going to sleep to the sound of the the handpumps thumping on the bar, the slow tick-over of the bus that stood outside for about ten minutes in the evening, the ting, clatter and crash of the till, the sound of my dad's laugh as he bantered with the customers. Even the East Kent bur of the locals, growing steadily louder as they consumed more.
During the night I would sometimes waken and hear the sound of the occasional car passing drowsily by, such a contrast to where we lived in West London, backing onto seven lines of the old Great Western Railway.
One lovely autumn evening my mother pointed-out the swallows, who were "going home as the summer was over". I can still feel now the overwhelming sadness that overtook me as I heard these words.
We were snowed-in one winter, I think that it was Christmas 1962. The snow drifted up to the top of the back door and I saw my first snow plough when it finally got through after about three days.
Only too soon the holiday would be over and we would be waiting in the saloon bar for the arrival of the taxi to take us to Canterbury. How it used to hurt, leaving the Anchor, with its smell of beer, furniture polish and antiquity;, soft, mellow golden light from the lanterns hanging from the ceiling, the view of the beer garden and the mellow red-brick wall though the mullioned windows, the dogs-who always seemed sad that we were going, Patch even got on the bus one night when we were leaving!
Just as hard was leaving my grandfather behind and knowing that it would be a few months until I saw him next. Back to London and endlessly questioning my mum as to when we would be going back- When are we going? Will it be soon?Is it next week?etc.
In 1972 my parents took their own pub, at Harrietsham, and I used to spend a week at Easter and again in the summer at the Anchor. By then Mill had died and my grandfather had his sister, Lil, staying with him. Even though I was only fifteen, I worked behind the bar- in fact I had pulled my first pint there when I was ten, not on the handpumps but on the new-fangled electric pumps which used to meter an exact half-pint at the push of a lever. I remember that lovely feeling of anticipation as I drew back the bolts at opening time, contrasting with the feeling of unease as I walked up and the corridor between the inner and outer saloon bar doors- a very creepy area.
My parents had two pubs of their own and I went on to run six, but none of them ever compared to the Anchor.
Now,when I go back to Wingham to visit my uncle and aunt, I can't help noticing how heavy the traffic is. I hear rumblings about a by-pass, but from experience, if this happens then a lot more of the businesses will disappear for good.
Thankfully, Archie's memory lives on, as I am told that his photograph still adorns the wall in one of the bars. 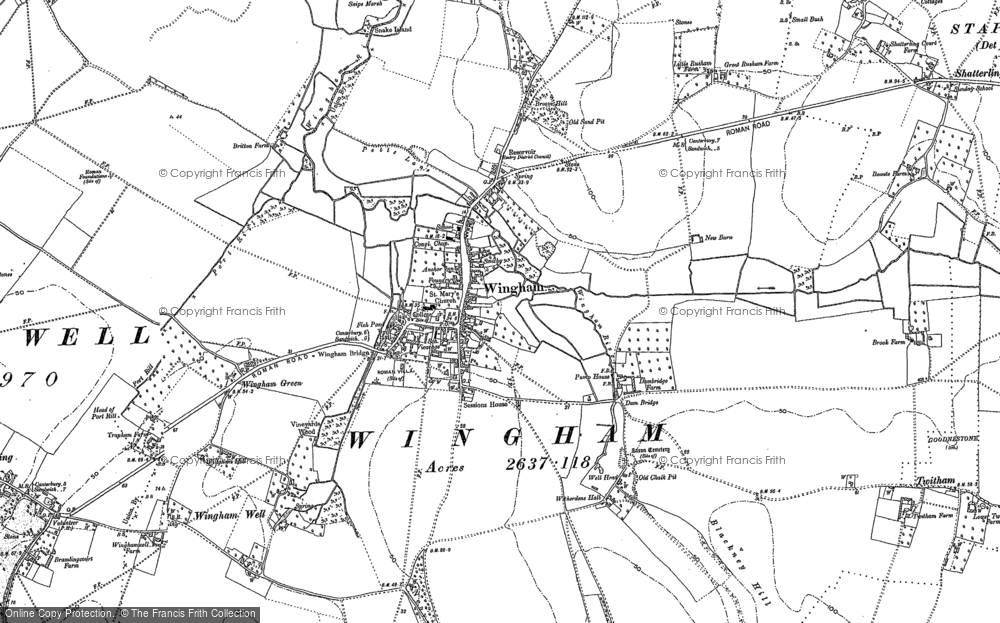