This fine school {formerly Woodley Hill} was opened in 1957. I was lucky enough to be one of 150 pupils who passed the 11plus {God knows how} and thus was one of the first intake, a real privilege although I didn't realise it at the time. I was cursed with the surname BRIGHT which I hated with a vengeance. I gained the dubious distinction of been given the first detention ever at Forest, given for no good reason by an obnoxious oaf of a prefect named Frampton. I have waited fifty years to say that!! The teachers at Forest were simply the best. They took a genuine interest in all of us plebs and I am so appreciative of all of them. Without the efforts of Messrs. Jackson, Headmaster-- Fanning,Deputy Head-- Fulbrook, Art-- Muncy, Sport-- Pettit, English-- Virgo, Geography-- Smith, Biology-- Marquis, Chemistry-- Enos, Physics-- and numerous others whose names I cannot recall right now, my fantastic and interesting life would not have been so fulfilling. I so much hope that some of these fine folk are still with us. I have enjoyed my working career enormously, the highlights of which have included 12 years as a guitar/vocalist/compere and a number of years working as a games designer with my own company, Flipper Games. I devised a game which I patented in the early 80's and which was played on the BBC for many years. It is called 'Give Us A Break' and it was hosted by Dave Lee Travis, a noted D.J. I advise any budding inventor to give it a shot, you may just get rich!! Thanks a millions Forest Grammar School for giving me a great start in life, you helped me to realise at least a measure of potential. I made up my mind of the day I left school that I would have some fun and some variety for as many years as I could. I'm 61 now and I'm still having a ball! I would like to contact Johnny Buck and Ronnie Bridle, a couple of really good mates from Forest. All the best from Bob Bright. 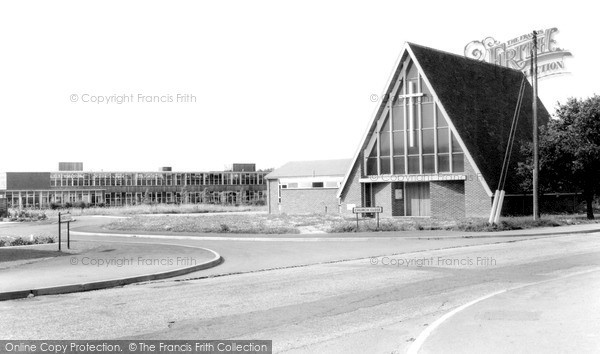 Winnersh, the Church of St Mary the Virgin c1965