Am I correct in saying that Enton Hall was a health and relaxation place and maybe still is? Where Pat Combes and such like used to go :-) I worked there briefly in the 70s as a relief herdsman on their small Channel Island herd dairy farm. I remember the dairy man who was on holiday was an Austrian called Herman Degner ... anyone have any info please do make contact :-)

Wed Oct 21st 2015, at 11:13 pm
jacobsen001 commented:
Hi
Yes, Herman and Mitzi. Mitzi has died too. She was the godmother to my sister Tina, and was always very kind and loving. They both were. Yes, there was a block for the staff, my uncle Jonas lived there. My dad Vincent managed to get him a place there, and a job helping him, as he had had a breakdown after the war and was in an institution for about 20 years. It makes me feel so so sad. My dad and Jonas came to the UK after the war. They were lithuanian prisoners of war for the Germans. I can't even imagine what that was like. So Jonas (John) helped my dad in the Gardens. I'm not sure if this is the John you mean as Jonas did not have emphysema. He did have a bad stomach ulcer which killed him just before Enton Hall closed down. My parents are still alive and now live in Thursley. Dad is nearly 90 now, and still well. All these memories are making me feel so melancholy!!!
Add your comment
Report abuse
Fri Sep 12th 2014, at 6:04 pm
Vince Eveleigh commented:
Hi Janine

Thanks for the information ...I was there in the 70s for around a month working as a relief herdsperson . I can vaguely remember certain parts of my stay , especially having my meals at Herman and Mitzi's place . I always found both of them extremely warm and welcoming people . I also remember a guy I chatted to ( staff ) who was suffering with Emphysema I recall his name being John ? I also recall having my own room in a block purpose built for staff .
Add your comment
Report abuse
Fri Sep 12th 2014, at 7:44 am
janinephillipps commented:
I just found the info online that Hermann Erich F Degner was born in 1921 and died in 1999 in North Surrey. RIP Hermann. Haven't found anything (so far) about Mitzi though.
Add your comment
Report abuse
Fri Sep 12th 2014, at 7:24 am
janinephillipps commented:
Hello Vince
I lived my whole childhood at 1 Field Cottages, Enton Hall - 1969 till 1988. My father Trevor Phillipps was one of the gardeners (Vincent Grygelis, from Lithuania, was head gardener) I used to help Herman on the farm, with the cows and chickens. His wife was Mitzi - also Austrian I think. Sometimes we used to go up to their house for tea - Mitzi had fantastic Austrian biscuits. Herman left Enton possibly in the late 1970's/early 1980's, to work for British Airways (I have no idea doing what, it seemed like quite a change) My Father (who died in 1993) was still in contact with Herman and Mitzi. I remember visiting them at their new place several times. The last know address I have for them was 51 Holly Avenue, New Haw, Weybridge. We have a group on Facebook, for old Enton Hallers. The health farm closed down in approx 1990, place was deserted for a while - squatters moved in, made quite a mess of it. Then developers bought it, and pulled down everything apart from the main house and the gate house (where Vincent and Elsa used to live) It has been turned into luxury apartments - I visited once, when the places were for sale. It was quite sad in a way. Janine
Add your comment
Report abuse 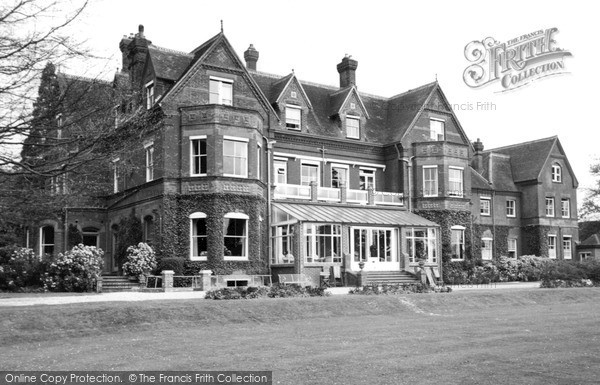