The Bathing Hole - a Memory of Witton Gilbert.

The stream in front of the war memorial ran down to the Browney river a few hundred yards below the Dean, where half of the Witton school kids learned to swim in deep pools created by dams made by Harry Bell and Davy Reynolds, they were much older than me and both very good swimmers and catapault makers. A lot of local familys picnicked at the bathing holes or the green bridge. Mr John Holmes, farmer, owned the land along the river and never stopped us from crossing his fields or playing in the river. The vicarage above the camel's hump had a fairly good orchard which we often raided in the autumn nights. The school orchard which was behind the labour hall only had pear trees in it and they were so small and hard, not worth raiding. I've just remembered this while writing, there was always great lumps of black tar floating down the river while we were swimming, how the water rats survived I'll never know, but there were lots of them. I'm not a great typist, Pussy Rain never taught us to type at Witton school.

Thu Jul 23rd 2015, at 7:36 pm
David Leckenby commented:
I remember the white bridge at langley park, my friend paddy riley, took me up a few times, it was up towards malton colliery, there was a path down thru bradleys farm to the bridge lots of local people went there on nice days. dave leck.
Add your comment
Report abuse
Thu Jul 16th 2015, at 8:24 am
derekfosterdel commented:
Reading about your experiences about swimming holes I remember th'White Bridge' near Langley where the kids used to swim in the Browney. It had a deep pool and some kid got into difficulty when he found it. More than one swimmer dragged him out. The pool too had tarry bits from the discharge fro Consett Iron Works. When the works shut the Browney was cleaned up and became a trout stream. My brother, Ken Foster, was on the committee that supported the clean up and subsequent fishing activities.
Add your comment
Report abuse 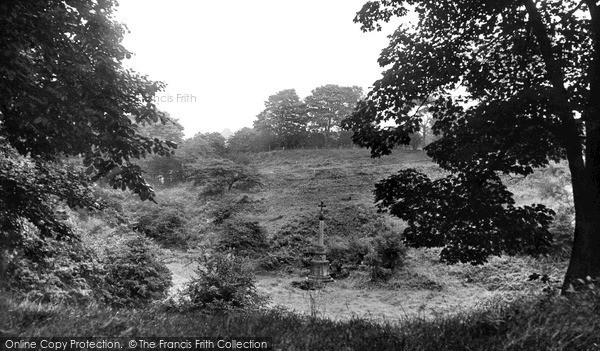 Witton Gilbert, the War Memorial from the Woods c1955