The Well House - a Memory of Yattendon.

This was where everyone waited for the buses that took us east to Pangbourne and Reading or west to Newbury, our main shopping town.  Newbury had a thriving market twice a week and buses were frequent, eight per day.
The Well House did indeed have a well beneath it and following a tragedy at the Royal Oak pub in which our next door neighbour was killed, the building was renovated.
Originally it was an open wooden structure supported on a low brick wall but after the deep well had been filled it had the sides bricked in.  Whilst this is less drafty when waiting for a bus it meant that we couldn't see it coming nor see who else was in The Square - important for villagers, who always want to know who is about.  It has recently (2006) been rebuilt following an accident but happily is basically unchanged.
Just obscured by the Well House is the cottage we first lived in on arrival in the village in 1951, on my 7th birthday. One of my brothesr took me to see the bathroom, we had bathed in a tin bath in our previous home. Unfortunately it was filthy and full of the largest spiders I'd ever seen. The floors downstairs took my poor mother days to scrub clean of chicken droppings. The previous incumbents had shared their home with their fowl friends.
On the far right of the photograph is the fence of the Reading Room, once home to poet Robert Bridges. He is buried in the churchyard.  As a child chorister I sang Christmas Carols there to Mr and Mrs Waterhouse who moved into the Reading Room after vacating the Manor House behind the village square. 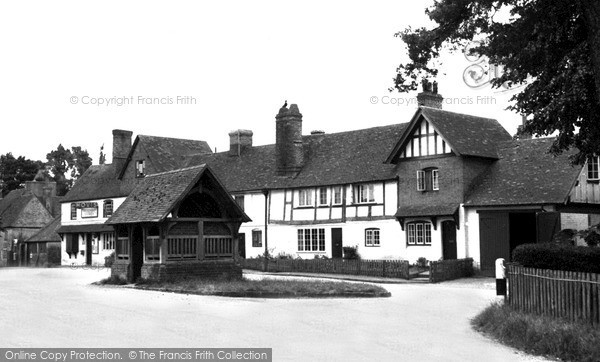