We Had A Caravan Here - a Memory of Aldbrough.

My family had a caravan in the field behind Johnsons Farm, opposite the corrugated iron clad cafe in the picture. At one end of the cafe were amusement machines such as; Jennings indian head, one armed bandits and other mechanical amusements. Our caravan, originally a tourer but then a static, was made by a small company called Quorn. I have photographs of it. My father, says that he remembers when, as a child, he would ride his bicycle past the cafe and on for a further few hundred yards. That would have been in around 1935. I'm guessing that the photograph is a little later than 1955. There were two rows of shacks running parallel to the cliff edge, north of the cafe and they were still there in 1956. The cafe was shortened to enable it to continue to trade for an extra year or two before its inevitable end. I have been back many times since, and always marvel at the huge amount of land that has been reclaimed by the sea since I first went there back in the mid 1950's. The toilet block was many yards behind the cafe and that was gone by the early 1990's
We had great fun there as children, running wild in the fields and on the beach. One family turned up in a double decker bus that they used as a motorhome. I wonder if they will ever read this? 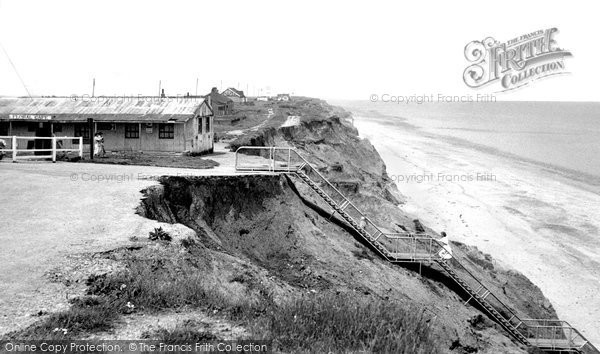 Aldbrough, the Cliffs and Beach c1955