War Years - a Memory of Aldershot.

For two-and-a-half dreadful years, from July 1942 to October 1944, my parents and I survived in three rooms at the top of number 40, Victoria Road, rented from a Mrs Pither. Only the front two rooms, overlooking the street, were habitable and the back room my father used as a sort of workshop. Water was from a tap, a few inches off the floor beside the loo, in a small closet at the top of the stairs. Hot water was boiled in a teakettle on an old gas stove in the ‘kitchen’. Washing was done in an enamel basin and the dirty water was carried out and flushed down the toilet. One of my earliest memories is of going to get water and getting confused with the tap. I couldn’t make the water turn off, the pot overflowed and, by the time my mother came to the rescue, the floor was flooded and water was dripping through the ceiling at the bottom of the stairs. Mrs Pither was not amused!

The top three windows to the right of the lamp pole in the picture are about in the right place to belong to number 40. The window closest to the pole lit the small room with the gas stove and the kitchen table. The other two were in a bedroom just big enough for my parents’ double bed with my bed at right angles to it. The only heat was a two bar electric fire.

In September 1942, I was enrolled as a pupil at Stanley House School, a private school. It was on St. Michael’s Road, just round the corner, under the railway bridge by the football ground, and up the hill. I was only four-and-a-half years old but going to school got me out of my mother’s way. Miss L. D. Elliff was the school principal. That first term cost three pounds and six pence which was quite a chunk of money considering that my father was making only thirty bob a week working at the Royal Aircraft Establishment.

The school’s air-raid shelter was comprised of two large steel boxes stacked, on their sides, one on top of the other in the garage. All the pupils were crammed in and a wire mesh was put up to stop them falling back out. I remember a doodle-bug going over and the teachers standing watching in the open garage doorway. The bomb missed us and landed on another school not far away. My mother arrived shortly after in a dreadful state, she having heard that a school had been hit.

If the school’s air raid arrangements seem a little primitive, they were perhaps better that what there was at home. When the warning siren started wailing, my mother and I would go and sit under the kitchen table. Being under a table in front of a window on the top floor of an old Victorian building at least ensured a quick exit.

Somewhere in all this I developed swollen adenoids. The standard practice then was to operate and: “we might as well take out his tonsils too, they don’t do anything anyway.” So I spent a few days in the children’s ward of Aldershot cottage hospital. My parents visited daily and once brought their ration of eggs. They seemed quite annoyed that I didn’t want to eat them. I didn’t care about not eating but do I remember complaining about some kid who kept crying all night and kept me awake.

For me all this, the way of life with rationing, the blackout and the home-guard rifle to play with, was perfectly normal, but those years must have been very unpleasant for my parents. 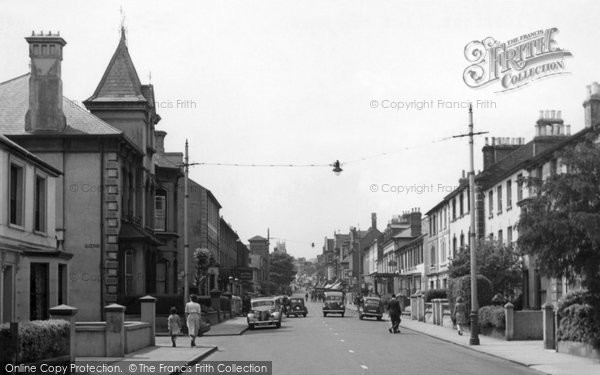