A selection of photographs from The Francis Frith Collection of wonderful Victorian bandstands. These elegant structures have hosted concerts and popular entertainment for over a century in our favourite seaside towns and city parks. We hope you enjoy these photographs today. 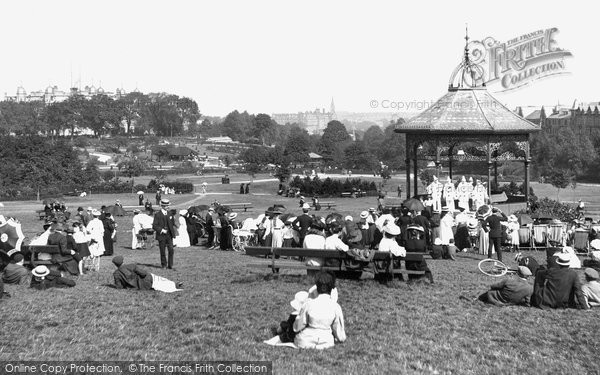 Harrogate is one of the oldest of England’s spa towns: its mineral springs were discovered in the 16th century. During the 19th and early 20th century, Harrogate was highly fashionable and very popular. Valley Gardens was a favourite place for a mild constitutional after taking the waters. Here a small crowd enjoys an afternoon concert given by a Pierrot troupe; this type of entertainment owed its popularity to the runaway success of the London production of the mime play 'L'Enfant Prodigue' in 1891, in which the character of Pierrot featured. The act would include songs, jokes, mime and monologues. 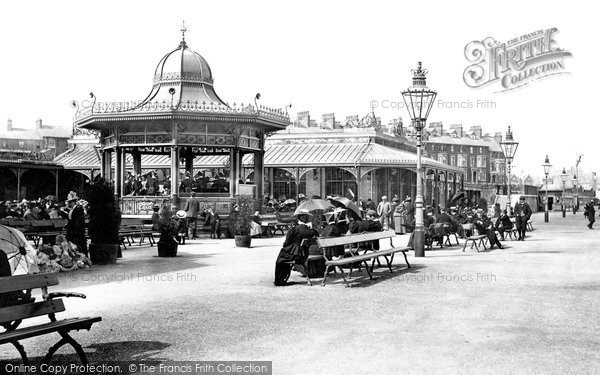 Built in 1896, this was a popular entertainment and meeting place. A military band plays in the bandstand. The fashionable ladies sitting on a bench listening have their hats tied on with veils, perhaps to stop the sea breeze carrying them off. 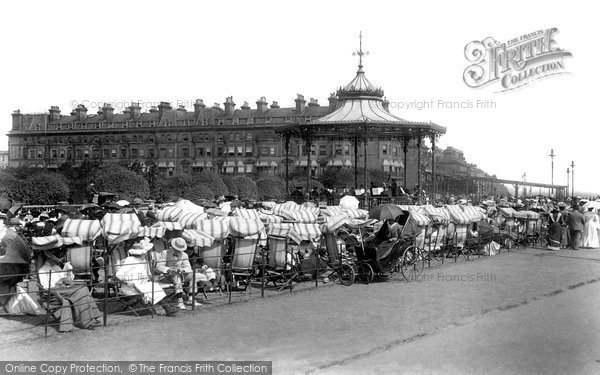 The Leas bandstand at Folkestone was built in 1885. A large crowd has gathered to hear the band, including the lady in the invalid carriage in the centre of the photograph. Further on, people are promenading. When Folkestone was one of the top seaside resorts, people of fashion would stay at the resort and parade in the morning so as to see and be seen. 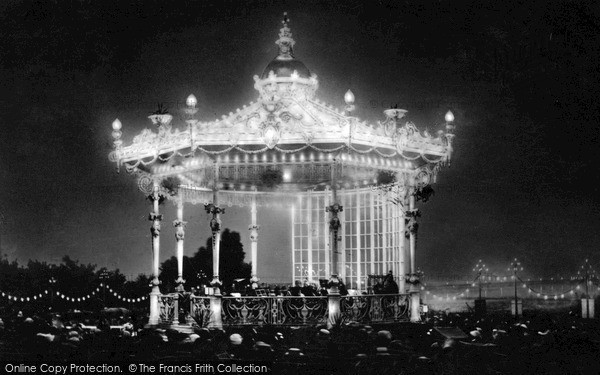 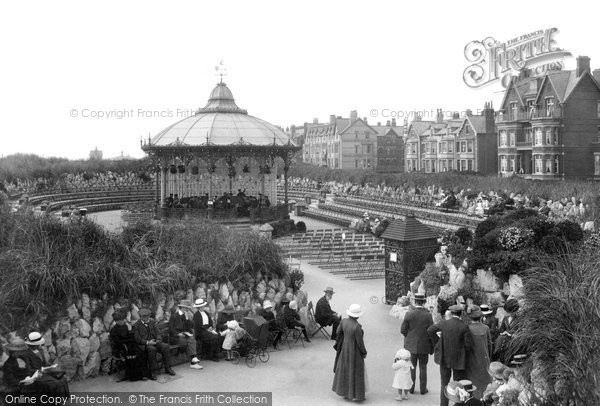 St Anne’s is the newest of the Fylde holiday resorts of Lancashire; the first major buildings were erected from 1875. Previously, it was a sandy wilderness known as Lytham Common. It was always a genteel place, a mood conveyed here by the well-dressed holidaymakers near its ornate bandstand.

Curiously, the deck chairs face away from the band playing in the ornate late Victorian bandstand, now replaced by the more sheltered Lido. Eight years later, the South Pavilion at the end of the pier was destroyed by fire.

Photo: Worthing, The Bandstand And The Pier 1921. 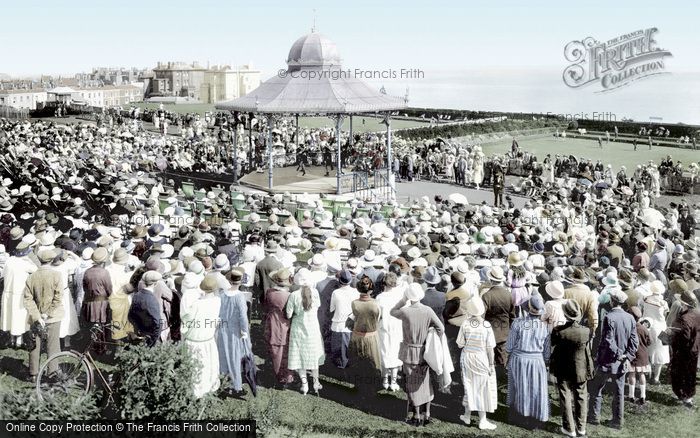 Summer season band performances at Hastings in the 1920s took place three times a day. Apart from local bands, well-known performance musicians would travel to Hastings to entertain the tourists. 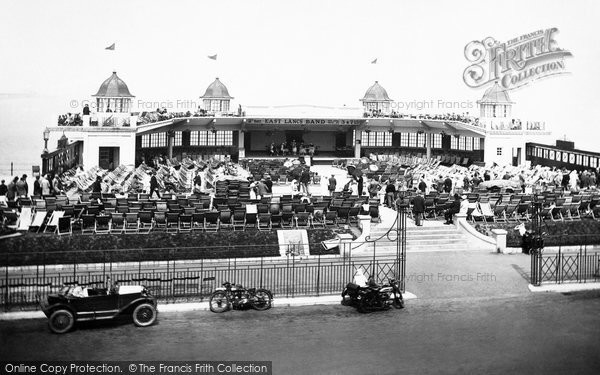 Two enterprising businessmen laid out this seaside resort on the Kent coast in the early 1830s, and the arrival of the railway in 1833 encouraged its growth. By the early 20th century it had become a highly fashionable watering-place to visit in the summer months. Here we see the central bandstand on the seaward side of the parade. Here the audience are assembling for what looks like a Sunday Concert. An open-topped tourer and motor-cycles are parked by the entrance railings. 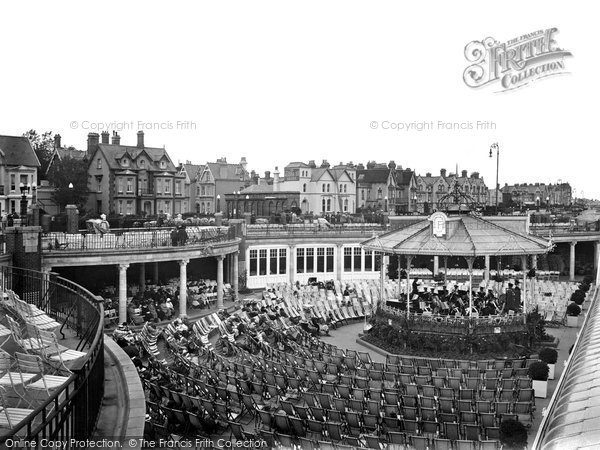 Clacton-on-Sea was founded as a seaside resort in 1871 - the year that the Bank Holiday Act was passed. This view shows Clacton’s ever popular bandstand which was built in 1899. Military bands played there throughout the season. 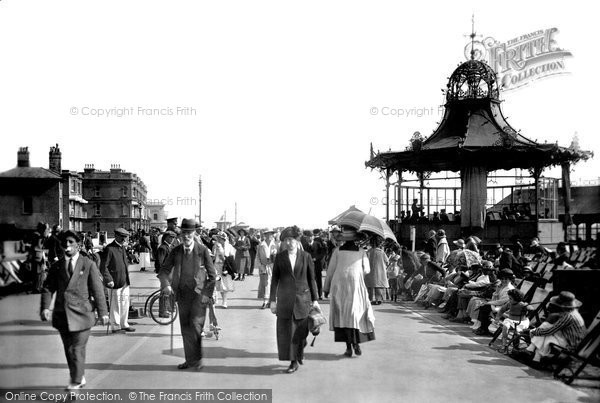 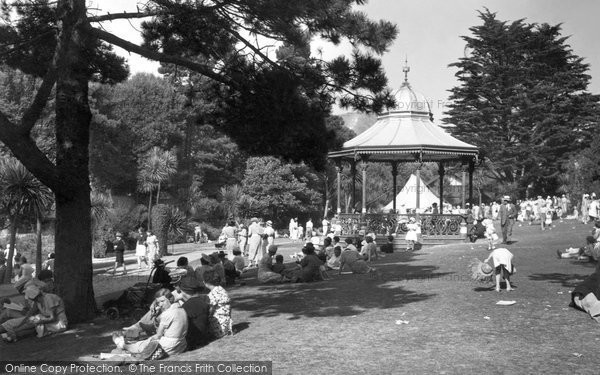 Ventnor transformed itself from an obscure fishing hamlet to a fashionable watering place during the last half of the 19th century. A sheltered location and mild climate have brought generations of holidaymakers to this popular resort on the Isle of Wight. 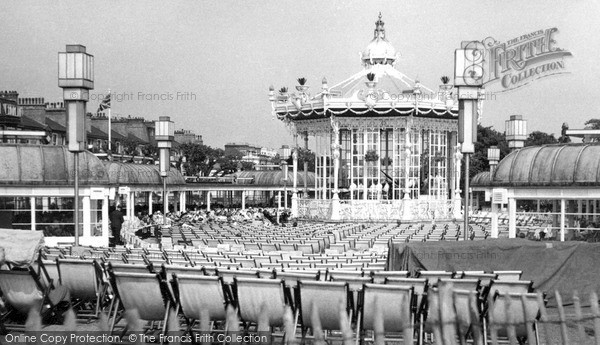 This ornate cast-iron bandstand dates from 1909 when it replaced an earlier wooden structure. The open-air concerts held here were very popular and some shelter was provided. 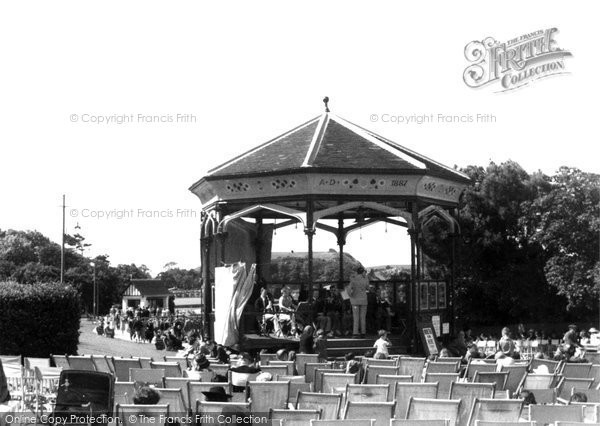 Although Clevedon was less popular than neighbouring Weston-super-Mare, devotees of this resort on the Bristol Channel valued its refined quietness in the 19th century. The bandstand was erected in 1887 to celebrate Queen Victoria’s Golden Jubilee. 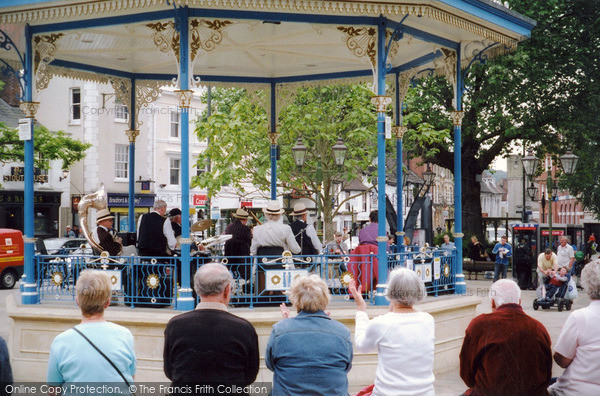 The Carfax bandstand at Horsham in Sussex continued to offer an ideal platform for live music during the summer. We hope you've enjoyed these photographs today.

Photo: Horsham, The Bandstand In The Carfax 2004.