The Swan Still Standing After All This Time. - a Memory of Cippenham.

Now living across the other side of the world, I recently surveyed my old haunts on Google Maps and it's so good to know that the old Swan is still standing - and looking better than ever, in fact. Much tidied-up, but still outwardly almost unchanged. Presumably now two decent sized houses? Hopefully not flats.

My wife and I worked for nearly two years as part time bar staff in the Swan in 1969/70 when we were saving to get married. Fond memories of Fred and Mary and their mad Alsatian (whose name I'm afraid I cannot remember).
Many's the time I staggered back home across the village green thanks to the generosity of the regulars who had stood me "one for yourself." A great tradition that has not made the transition to this part of the world.

How did that relatively small housing area maintain three pubs for so long? Good to see that two of them are still in business, especially as so many English villages have none at all now. I do so miss the English pubs.

Thank goodness the green is still there also. How on earth has that stood the ravages of the housing boom?
Ah, memories! 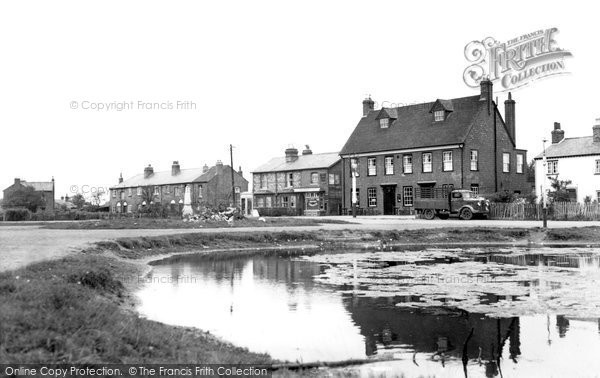 Cippenham, the Pond and Swan Inn 1950