Apex corner was our local shopping area. I lived close to it from 1941-1956. The picture well represents it over that period. It barely changed in 15 years. The shops shown in the photograph remained the same. On the corner over the roundabout they were roughly in order: Tesco's, Boots the Chemist, the Apex off licence, Salisbury, Meyers the greengrocer, Sylvester's the news agent and just out of view the Apex cafe, Vincent's Hardware and Norman Davis electrical and toys.

A memory shared by peterannis on Oct 31st, 2014. Send peterannis a message

Sun Mar 15th 2015, at 8:10 pm
rsarge1012 commented:
My name is Ron Sargeant and I lived in Worcester Crescent from 1939 until 1964 I can add a few more shops to your list. On the far end to the left as you view ths photo was a café by the name of the Blinking Owl. and next door to that was Uncle Arthurs Gents Barbars But I also think that there
was a second hand car showroom on the very end.. I believe that before Tescos the main food shop was a branch of Sainsburys. Pretty sure that this was next door to Sylvesters. I bought my first big bicycle from Noman Davis and I believe that this was the last shop on the right. Just to the left of where the photo was taken was a blue police box and the air raid warning siren. The only
bus services were the 113 from Oxford Street down to Edgware
and the 52 from Borehamwood to Victoria. Apex corner
was also served by two green line routes the 712 and 713
I remember going blackberry picking with my mother on the land opposite the shops by the bus stop before any building
was there and the road, a turning from Uphill Road, was only
rough and not made up. The bus journey from Apex corner to the Broadway was 1d for adults and a halfpenny for me. The
A1 and A41 were not dual carriageways and there used to be
a sign post slap in the middle of the roundabout and I well remember the traffic chaos caused twhen the sign post
was ACCIDENTLY moved round in approximately 1949 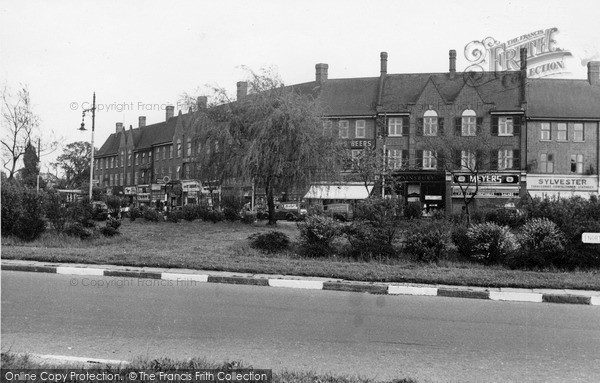