Westgate On Sea Holidays In The 1960s - a Memory of Westgate on Sea.

My parents took myself and my late brother to Westgate on Sea almost every Easter from 1959 to 1971. Living in west London we caught the 2.40pm train from Victoria, arriving at Westgate on Sea about 4.10pm, a short walk along Station Road, St Mildred's Road then a left turn in to Rowena Road. At the Sea Road end on the right hand side of Rowena Road stood a building called Ledge Point (now the site is McCarthy and Stone retirement flats) which in the above picture is the large building in the middle with the mock Tudor style front. It was a Holiday Centre of the P.O.F.R. (the Post Office Fellowship of Rememberance). We would normally arrive on Maundy Thursday (the day before Good Friday) and leave on the Saturday following Easter Monday. We spent a lot of the time walking along the front by St Mildred's Bay and along towards Westbrook via the Sunken Gardens and onwards into Margate. I remember that Westgate had a nice selection of small shops in Station Road and St Mildred's Road a large post office, a cinema (still there), Jackson's Garage towards the level crossing end of Station Road.
One summer in about 1963 or 1964 we stayed at the Barkston Court Hotel in Roxborough Road. I remember waking up on the first morning there and hearing the level crossing gates banging open and shut and watching the trains going by.
Sometimes we would go to Margate by bus, the No 51 at that time in the summer ran during the day about every 6 minutes, some time there would be 2 or 3 of them at the Westgate Station Stop, the crews of these buses would often be in a nearby cafe for a well earned cup of tea. An open top bus service started in 1959 running from Birchington Minnis Bay to Clifftonville Palm Bay via West Bay, St Mildred's Bay and Westbrook, keeping as close to the seafront as possible. The open toppers were painted in cream with maroon trim and large coastal service lettering(in blue) on the panels between the upper and lower decks that normally carried adverts.
I have visited Westgate a few times since last staying there in 1971. My last visit was in 2004. Westgate looked much the same but I had a big shock when I got to Margate,
sorry to say it but Margate has gone downhill big time.

Wed Nov 16th 2016, at 10:22 pm
nick.rosy9 commented:
Im from kendal and dad was a post office engineer and remember most people had a post office link who stayed at ledge point . Great times we went there when i was about 5 ( 1969) and again in about 1974.
Ive been watching a scifi 9 pm on sunday called "humans" and it must have been filmed at times in westgate bay as it looked so familiar and hence me researching it and on here. I loved it there the hotel manager had a scottish name mcvee or something . I remember being there and a near biblical plague of ladybirds were everywhere,we were covered in them but being a kid i just thought thats what happened on holiday
Add your comment
Report abuse
Wed Aug 24th 2016, at 6:04 pm
jelliot03 commented:
My dad used to take me to Westgate every year, for our annual holiday , back in the 70's. Apart from once, we always stayed at Ledge Point. I have such fond memories of Ledge Point and Westgate.
Thank you for the photos
Judith Elliot
Add your comment
Report abuse
Sun Aug 16th 2015, at 8:04 am
jrwatson508 commented:
My dad took us only once to Westgate On Sea but the memory of the week we spent there in August 1967 has stayed with me.

My dad worked in what was known as the Death Claims Branch of what was at the time the Post Office Savings Bank in Charles House in Kensington (London) and I remember that the property we stayed in was linked with the Post Office in some way. On reading your memory I think we must have stayed in Ledge Point House; the image of it in the Francis Frith post card approximates to the blurry image I have of it in my mind and I know it was only a short walk from the (Carlton) cinema because we saw the Sound of Music there during that week.

This week I had the chance of visiting the town for the first time in 48 years and took at look at the site (now as you say a retirement home). Oddly enough I can't remember the property directly overlooking the sea but the chances of there being another Post Office related property just a short walk from the cinema are virtually nil so I think it must have been Ledge Point House where we stayed.

Thank you for your memories of the town and for helping me locate where we stayed all those years ago. 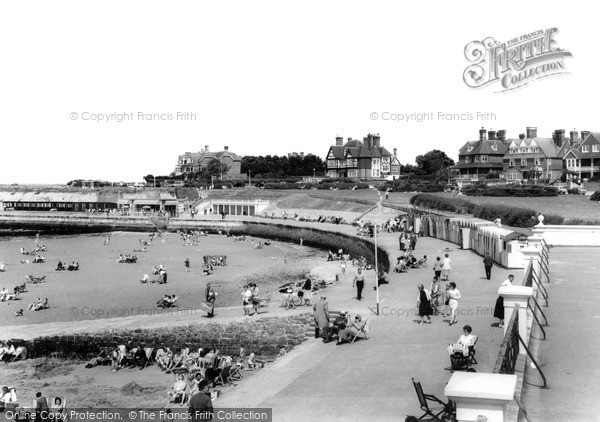