My Time Living At No. 1, Corner House, Portmore Park Road - a Memory of Weybridge.

I was born here in Feb 1947, in the corner bungalow (shown here in the photo as a house) and lived with my parents and my older brother until the summer of 1964 when I left school and moved away to start work. I remember playing in the front garden and climbing onto the smaller corner pillar, on the right in the photo, and being told off by my father! The large house shown in the picture must have been demolshed in the thirties before the war, as a number of bungalows had been built along Portmore Park Road during the thirties, the corner plot being the bungalow my parents aquired. Then in the fifties, they extended the bungalow footprint to include an enlarged lounge and new dining room. My earliest memories were playing on the grassland further down Thames Street towards Weybridge, walking or cycling to the river opposite Shepperton Lock, or exploring the many streams around and along the river Wey and the Wey navigation canal and its two locks. Having been living away from the area now for 50 years and now retired, I thought I would visit Portmore park and Weybridge which I did earlier this year (2012). Although there have been changes, I was pleasantly surprised by how much of the area had remained. My parents bungalow had gone, replaced with a smart, white painted two-storey house, but some of the smaller, single-storey bungalows still remain and the two smaller and larger white pillars seen in the 1903 photo are still here today! Peter Beckham. 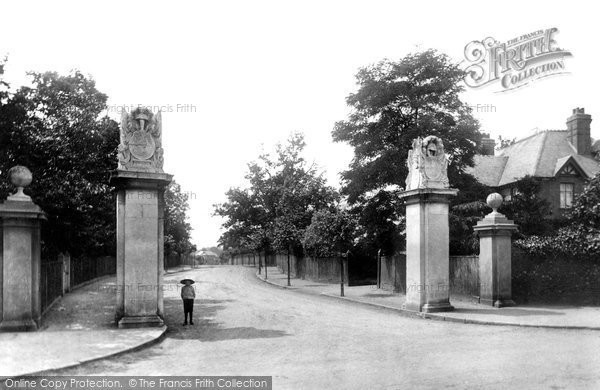