Queens Road... - a Memory of Weybridge.

This scene of Queens Road brings back many many memories for me. First of all, when very young and at the early months of WW2, probably in the late Autumn with falling light in the after school hours. Somehow I had come across or discovered the quite elegant shops there all on one side that one would frequent when being taken to the Odeon cinema seen further up, and if one lived in Oatlands Park by way of Oatlands Avenue. The social atmosphere was quite distressing and depressing as war conditions became more intensive each day with more people being called up for military service and munitions factory work at Vickers Armstrong where less than six months previously Brooklands had held its last ever international motor race on 1st August 1939. My Mother had changed jobs and we had changed house too. Knowing she wouldn’t be home yet, I wandered off in an opposite direction to Queens Road with a certain purpose in mind: this was to take another look in a toy shop window to see whether a cherished item on sale was still there (!) at one of the articles present which had taken my whole attention so much did I admire it. All such things were becoming rare which only intensified my interest. The item in question? It was one of the Dinky Toys models and of a police motor-cycle and side-car with the police rider - or speedcop as we used to call them - and separate ie not fixed to his seat, and all in the dark blue colour of the police. I think I might well have stood entranced by its solitary presence on one of the window stands. Am not totally certain but at times I think I did venture into the dark interior of the small shop which must have been in the process of closing up for good through lack of public interest given the mounting terrible pessimism of those dark days, only to learn the price of the much coveted item was one that I could never dare expect my Mum to entertain! Indeed, she hardly gave an answer at all and quite rightly so! I was learning fast on the despair of everyone older than my silly self! And all at 6 1/2 years but there would be far more events to happen before my age doubled in years at the end! Pray, be indulgent with my overlong details of such an ordinary and banal memory event! 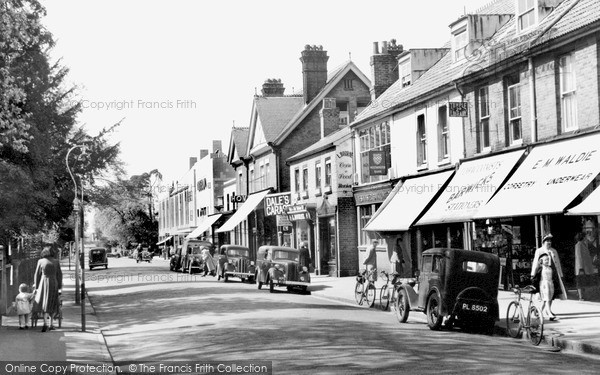