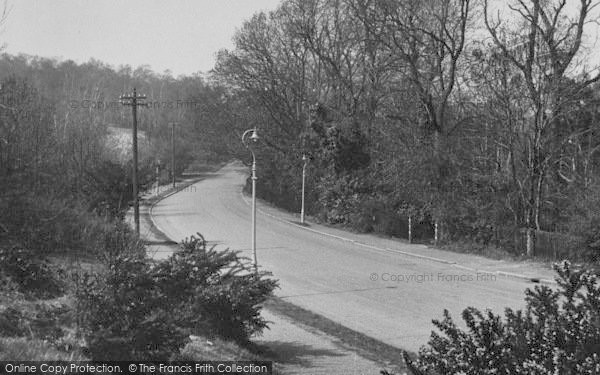 This is the 6th of 91 Shirley photos.

Buy "Shirley, Oaks Road c.1955" available as a print on its own along with framed and canvas options.

I was born in Croydon in 1936, and lived In West Way Shirley. My Mother, could not bear to part with us, so, we lived at home all through the war. A bomb was dropped into the garden next door, after six months it was discovered, it had not "gone off!" We were moved up the street, while the Army defuised it. We were told it (...Read full memory)

I spent many hours in the park, not just playing, but the Scout Hut was there too. It was a wooden building with gas mantle lighting and a coke stove for the winter. In the summer the windows, which had metal bolted shutters over them were opened to let natural light in. During the winter, you would arrive and it was like being in (...Read full memory)

I think this must be the Windmill by John Ruskin School on Upper Shirley Road. If I remember right there was a pub (The Sunrise?) nearby. Many an hour was spent on my old track bike in Shirley Hills and the tea shop.

I lived in Clinton Road, Shirley from 1950 to 1956 when we moved to Smethwick. At the time it was a cul-de-sac and we lived at number 95 right at the end. There was a wood next to us with a wide path though it to Widney Lane. There was also an old house halfway through the wood. The wood has now gone and houses built on it but (...Read full memory)

Back to Shirley
Back to all Shirley Photos