The history of Southampton and specially selected photographs

The busy modern city of Southampton stands on historic foundations. The Romans established a settlement in the area, and an Anglo-Saxon town, known as Hamwic, developed into one of medieval England’s most important ports. The name evolved into Hamtun, and by the medieval period the port was known as Hampton. The name Southampton began to develop in the medieval period, deriving from Suohampton or Suhampton, probably to avoid the town being confused with Northampton.

Southampton and Hampshire's strongly defended coastline are an intrinsic part of Britain's history. Acting as a symbolic gateway to the world, Southampton Water is the wide estuary of two great rivers - the Test and the Itchen. In the golden days of ocean-going travel, this internationally famous waterway provided first-time visitors to these shores with one of the first glimpses of English soil. Today, the waterfront is more heavily industrialised and the great passenger liners are certainly fewer. But the sense of maritime history is still tangible as one recalls the names of the great liners which once plied these historic waters - the 'Mauretania', the 'Aquitania', the 'Queen Mary' and the 'Queen Elizabeth' among them. The 'Titanic' sailed from Southhampton on her ill-fated maiden voyage in 1912, and the 'Great Eastern' was moored in Southampton Water prior to her maiden voyage in 1861. Southampton Water has also played a key role in the development of flying boats and sea-planes, which is superbly illustrated in the city's Hall of Aviation. Today, the scene is still a bustling one: you do not have to wait long before you spot an oil tanker, a tug or a ferry, and the low roar of the hydrofoil may arouse your interest as it zips in and out of Southampton Docks. There is always something worth seeing on Southampton Water. But what of the city?

Think of Southampton and we tend to think of passenger liners, freight traffic and ferries. For 500 years it was one of England's leading ports, synonymous with shipbuilding and cruise liners. However, take a stroll through Southampton today and you will see that it is a fascinating mix of ancient and modern. This is a city that has much more to offer than its sprawling docks and bustling waterfront.

An obvious stop on any tour of Southampton has to be the Hall of Aviation. This entertaining attraction is a fitting memorial to the achievements of R J Mitchell, who designed the famous Spitfire fighter aircraft. Here, visitors can climb up to the flight deck of the legendary Sandringham flying boat around which the hall was built. The inside of the flying boat is reminiscent of a first class railway carriage, a classic reminder of the great days of luxury travel. Southampton Water was where these wonderful flying machines used to take off and land; it was a centre for early experimental flying and later a base for long-distance flights.

Not far from the Hall of Aviation is a stark reminder of the 'Titanic'. The old Terminus station, which was opened in 1840 and is still regarded as a wonderful example of classic railway architecture, is where passengers bound for the doomed ship arrived, spending the night at the majestic South Western Hotel prior to her depature the following day. A small quayside memorial marks the spot where the 'Titanic' was berthed prior to her departure for disaster in April 2012.

Further along the quay we can begin to trace the old town wall, which dates back to about 1350. This is the start of a walk into history, taking us round the medieval town of Hampton, as Southampton used to be known, and visiting many interesting buildings and landmarks en route. Begin by having a look at the 15th-century God's House Tower, originally the south-east gate of the old town and one of the earliest artillery fortifications in Europe. The name probably derives from the Norman chapel that it contains. It is now a museum with a collection of archaeological finds. Heading north brings us to the ruined church of Holy Rood, erected in 1320 and damaged by enemy bombing during the Second World War, on the night of 13 November 1940. Known for centuries as the 'church of the sailors', its ruins have been preserved by the people of the city as a memorial and garden of rest dedicated to those who served in the Merchant Navy and lost their lives at sea. There is also a memorial to the stewards, sailors and firemen who perished in the 'Titanic' disaster. Southampton was the home-port of the ‘Titanic’, and many of the crew and staff were local. It has been estimated that around 500 local households lost a family member when the ship sank. The city has several memorials commemorating the disaster. As well as the memorial to the stewards, sailors and firemen who perished that can be found in the memorial garden of the ruined Holy Rood Church, the ‘Titanic’ memorial in East Park recalls the engineer-officers who ‘showed their high conception of duty and heroism by remaining at their posts’. There is also a memorial to the musicians who went down with the ship, which can be found at the junction of London Road and Cumberland Place, and a touching memorial in St Josephs’ Church in Bugle Street commemorates the restaurant staff who died.

Our next objective is Bargate, one of the finest medieval gateways in the country, dating back to the late 12th century. Bargate was originally built to guard the main road into Southampton. Over the years it has been a toll-gate, a prison, a guildhall and a museum. The original Norman arch dates back to about 1175, and the tower was added a century later. The upper floor used to be a guildhall.

A pleasant stroll through the city parks brings us to the statue of Richard Andrews, a 19th-century coach-builder who was five times mayor of Southampton. The statue was unveiled in 1860, a year after his death. Nearby in this corner of the city is Southampton's awesome cenotaph, designed by Edwin Lutyens. Close by in Watts Park is an imposing monument to Isaac Watts, the famous hymn-writer, who was a native of the city. Isaac Watts wrote ‘O God Our Help In Ages Past’, and the clock on Southampton's Civic Centre plays this hymn every four hours.

Heading back south again, back towards the quay, brings us to Portland Terrace, its elegant Regency design and wrought-iron balconies recalling Southampton's days as a fashionable spa town and resort. Our tour concludes with a return to the old town walls. On 4 October 1338, French, Genoese and Sicilian raiders successfully attacked Southampton, looting and burning the town. After this the town walls were rebuilt, in some places up to 30 feet high. Soon we reach Arundel Tower and Catchcold Tower, upon which there was an anti-aircraft gun during the Second World War; the name of Catchcold Tower is probably a nickname, given by shivering guards! Shortly we reach the remains of the old castle and site of the earliest fortifications for the ancient port. Evidence suggests that there may have been a quay here, in the days when seawater reached this far inland. Castle Water Gate, as it is known, may well have had wooden, detachable steps running down to the water's edge.

Beyond Castle Water Gate, we come to Pilgrims Gate, where we leave the old wall and make for the Tudor House overlooking St Michael's Square. This striking timber-framed building dates back to about 1500 and includes some fascinating photographs of Southampton in previous years. Make time to have a look at the Tudor garden which occupies a delightful hidden corner of the city. From here our route takes us south along Bugle Street to Westgate. Henry V embarked his troops from Southampton for war with France in 1415, and men marched through Westgate who went on to fight at the Battle of Agincourt. Adjacent to Westgate is the Tudor Merchant Hall, which was moved from St Michael’s Square to its present site in 1634, after falling into disrepair and being sold as a derelict structure - an early example of recycling. It was originally built around 1428, and housed the Woollen Cloth Hall and Fish Market. It was restored by the City Council in 1975.

From here we make for the waterfront and the medieval Wool House - cloth and wool were particularly important exports from Southampton in the Middle Ages and this building was used as warehouse. French prisoners of war were confined here during the 18th century, and some of them carved their names on the roof beams. The Wool House now houses the Southampton Maritime Museum, tracing the history of merchant shipping. and expaining in fascinating detail Southampton's role as one of the world's great ports. 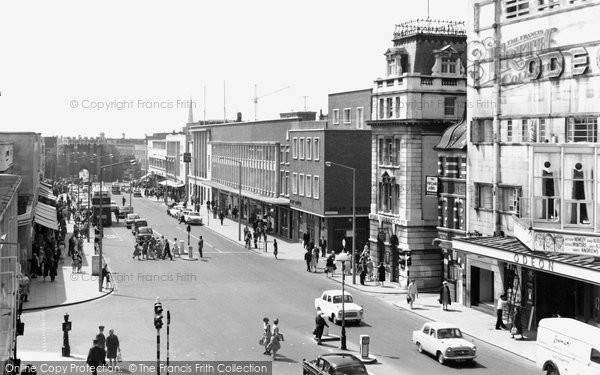 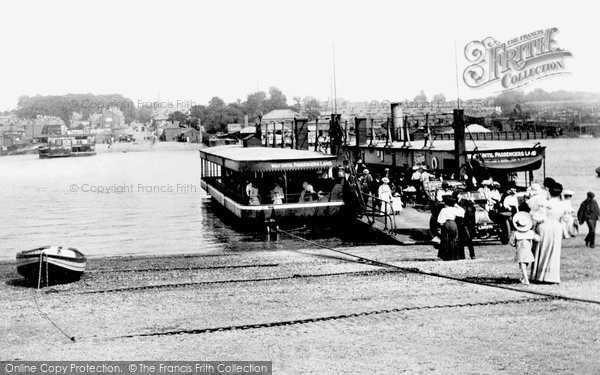 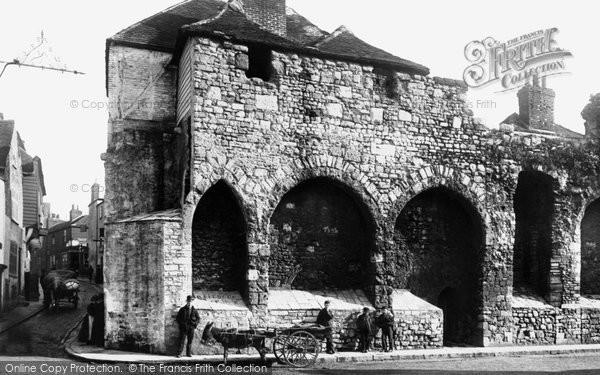 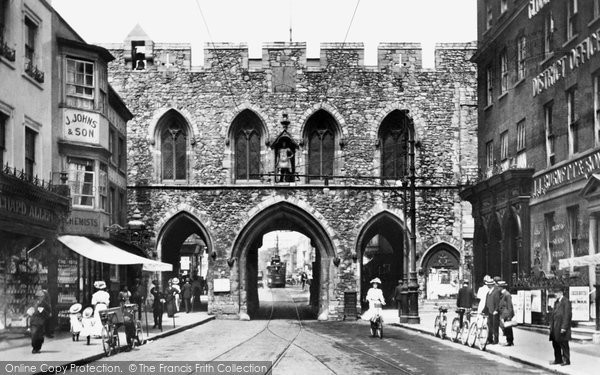 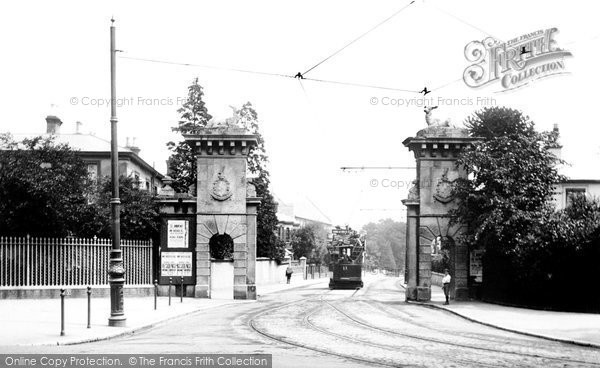 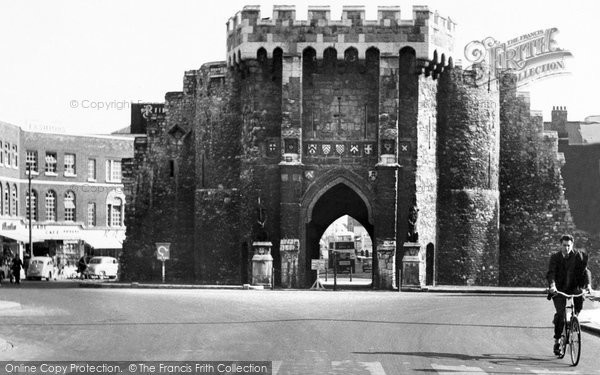 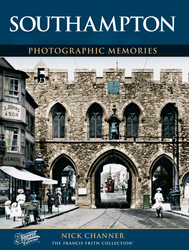