A Memory of Bristol.

The old St James Barton area of the city was demolished in the late 1950s to make way for Bond Street and the bus station. The rebuilding of the city started almost as soon as the Second World War had ended. The blitz destroyed many historic buildings and St James Barton was changed forever. It is now a shadow of its former self.

The city continued to expand after the war and much of the modern architecture of the 1970s remains plain ugly. Bristol's post-war plans for the city turned out very differently than the dream of the bleak blitz years.

From 1238 an annual fair held over fifteen days, was held here. Originally starting on July 25 (the feast day of St James) it was later changed to the first fortnight in September. The fair, which was held in the churchyard and adjoining streets, was regarded as the most important of the Bristol Fairs. By the 17th century the fair was so prominent that merchant ships sailing in to Bristol for it were frequently attacked by Turkish pirates in the Bristol Channel. The last fair was held in 1837. It also subsequently left its mark on the geography of Bristol as the roundabout nearby is called the Horsefair.

Bristol's Great Fairs had a reputation for wild characters, assault, robbery and all kinds of sex for sale. The Great Fairs are little more than a memory now, recalled only in street names like Horsefair and Haymarket. But in their day, they were regarded as the most crime-ridden and dissolute markets in Britain. And they were so famous that, for centuries, the Navy had to patrol the Bristol Channel at fair time to stop visitors being attacked or kidnapped by pirates and slavers.

The annual Sr James Fair in September was such a magnet for traders that, in 1636, 12 Turkish warships were spotted off Cornwall, waiting to waylay people heading to Bristol. And every year there were reports of raiders hanging around the sea approaches to Bristol, looking for rich pickings in slaves or trade goods and navy frigates patrolled regularly to frighten them off.

It may have been St James Fair, the best known, which brought one of the many outbreaks of plague to Bristol in the seventeenth century. The City Corporation at the time was deeply concerned that the disease would travel to Bristol on goods brought in from London. It banned all leather goods and upholstery, but the London wholesalers appealed to the government, saying they made most of their annual income at Bristol. The government quashed the Bristol ban, and left the city open to infection.

Historian John Latimer left a wonderfully evocative description of the fair at its height. Blankets and woollens from Yorkshire, silks from Macclesfield, linens from Belfast and Lancashire, carpets from Kidderminster, cutlery from Sheffield, hardware from Walsall and Wolverhampton, china and earthenware from Staffordshire and other counties, cotton stockings from Tewkesbury, lace from Buckinghamshire and Devon, trinkets from Birmingham and London, ribbons from Coventry, buck and hog skins for breeches, hats and caps, millinery, haberdashery, female ornaments, sweetmeats and multitudinous toys from various quarters arrived in heavily ­laden wagons and were joined by equally large contributions from the chief industries of the district.

To these again were added nearly all the travelling exhibitions and entertainments then in the country - menageries, circuses, theatres, puppet shows, waxworks, flying coaches, rope-dancers, acrobats, conjurors, pig-faced ladies, living skeletons, and mummers of all sort who attracted patrons by making a perfect din.

It need scarcely be added that the scene attracted a too plentiful supply of pickpockets, thieves, thimble-riggers and swindlers of every genus. The fair attracted everyone, from the Duke of Beaufort's children to the offspring of the rowdy and dangerous Kingswood colliers. There were stalls everywhere and what Latimer calls 'standing places', wooden constructions that took a month to build.

But as the years went by, the business side of the fair gradually decreased and the entertainment side increased, as did the number of bush houses (unlicensed drinking dens). The nine-day fair gradually extended to become a fortnight and, as Latimer puts it, 'a centre of corruption and demoralisation'.

Everyone piously condemned the fair, but made so much money out of it that nothing was done. In 1813, a St James church member even offered 3,000 - a huge amount then - to have the fair suppressed. It was contemptuously rejected as much less than the profits made.

St James was one of two great Bristol Fairs; the other was St Paul's, which took place on March 1st at the end of winter. In the weeks leading up to the fairs, civic business was postponed, and householders made some useful cash letting rooms to visitors from all over the country.

The London fashion trade saw the Bristol fairs as a great showcase, and wholesalers of every kind of goods turned up from around the world to see what Britain had to sell. Poet Laureate Robert Southey, who was born in Bristol, went to one fair as a child where a shaved monkey was exhibited as a genuine fairy, and an equally hairless bear was dressed in checked coat and trousers, sat in a chair and labelled as an Ethiopian savage. The Bristol Great Fairs were abolished in 1838 when the thieving and bawdry became too much, even for cash-hungry Bristolians.

As Latimer puts it primly: 'The decree put an end to saturnalia of which but a faint conception can be formed in our times.'

Bristol may have had two of the biggest but there were once fairs everywhere; Somerset alone had 94, including Shepton Mallet, where wives were once sold, but also where butchers from Bristol and Bath bought up to 400 fatted calves a day. Bath once had four fairs (one for the King, one for the bishop, one for the priory and one for the townsfolk) while the bishop also got the profits from Axbridge's lucrative St Barnabas's Fair.

There were other famous events at Glastonbury, Wrington, Taunton, Bridgwater and most other places where people traditionally gathered to buy and sell. Bristol remained a fair city, even after the decline of the two Great Fairs. Travelling showmen wintered here for years - Billy Butlin began his showbiz career with a Bristol fair - but few of the traditional fairs survive today.

Priddy still has its sheep fair, Chipping Sodbury its Mop, where servants were once hired, and Frome its cheese fair. Big events like the Royal Bath and West Show or the North Somerset Show are the real descendants of the Bristol Great Fairs, although the roguery, deception and outright sex are missing.

This memory is written about Bristol, St James Barton c1960 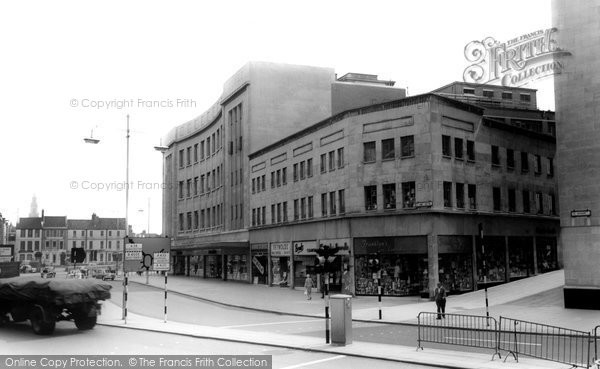